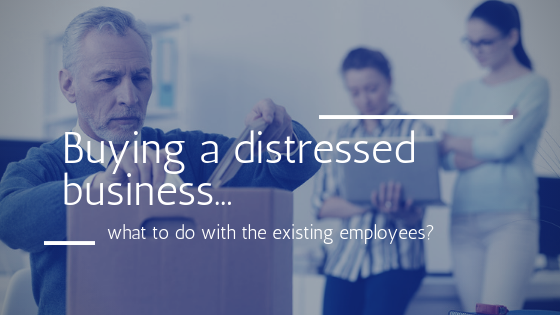 Buying a business out of administration doesn’t come without its complexities and dealing with existing staff can be one such complexity. Taking on the staff of a distressed business when you take it over, comes with legal responsibilities, which we will go through below. However, if you handle the situation right, your new employees could become your greatest assets.

Utilising key staff members could be your key to success

Any entrepreneur or business owner will know that the success of a business can often rest on the strength of its staff. If you have purchased a struggling business out of administration and the deal includes a number of staff, there are ways to ensure they become an asset, not a burden

The staff members you have inherited in the deal are likely to be extremely concerned about what lies ahead for them. They have been through a very uncertain time and are likely to be cautious about what the future holds. The very least of your responsibilities as their new employer is to be open with them. Whether they are keeping their jobs or not (and there are legalities to consider – see below) they should be notified as soon as possible.

An example of how to handle the transfer of staff correctly is the very recent purchase of Colchester-based logistics business, Systematic Logistics International (SLi), out of administration by Palletways UK. Palletways’s network development director, Barry Byers made it clear to the SLi staff that they were highly valued and will keep their jobs.

He stated publicly: “Over many years, the staff at SLi have played an invaluable role in the success of Palletways in South East England. We are delighted to acquire SLi with its highly motivated workforce and are now working with the staff and customers to take the business from strength-to-strength.

We have an excellent track record with acquisitions across the UK and with supporting newly acquired businesses and turning them into very successful depots within our network.”

This open communication will no doubt have set SLi’s staff members’ minds fully at rest and they are likely to respond loyally to their new employers as a result.

JPI Media, the new owner of local newspaper publisher, Johnston Press, has not handled its purchase of the business and its staff quite so well. JPIMedia is a newly-formed consortium of Johnston Press’s creditors and, despite stating that jobs have been rescued through the deal, unions are concerned about the long-term motives and staff are likely to have been left extremely unclear as to their future prospects.

JPIMedia stated that the purchase of the struggling newspaper firm, “secures jobs and [the] future of its brands and titles”.

It added: “JPIMedia’s shareholders recognise the vital role that local and regional media plays in the communities they serve and remain committed to protecting and enhancing the value of the business in the future.”

However, staff have continued to feel insecure, especially following the possible loss of their pension as part of the pre-pack deal. The National Union of Journalists is calling for “meaningful guarantees” about jobs and roles. It added that it had “significant concerns” about the long-term intentions of the new owners.

We can only imagine that relations between the new owners and the staff at Johnston Press are not particularly conducive with a successful and happy work environment as a result of this poor communication.

What happens to existing staff when a business goes into administration?

As soon as the administrators are called into a struggling business, a moratorium is imposed and no legal action can be taken by the staff. The administrators then have 14 days to decide whether the staff will be kept on at that point. They can be dismissed to reduce costs and the employees will have to join the queue for any outstanding monies owed with the other ‘ordinary creditors’. If they are kept on after that 14-day period, they will become ‘preferential creditors’ and may stand a better chance of receiving any unpaid wages or redundancy pay.

If staff are kept on, they won’t always retain the same contract of employment as the administrators do have the right to change staff contracts to some extent if it is deemed necessary for the survival and sale of the business.

What are your legal obligations to staff when you purchase a business in administration?

When you acquire a business out of administration, which has existing staff, you will be obliged to honour their employment rights under the Transfer of Undertaking Regulations. The new owner will become responsible for paying you any salary due to you and for continuing your employment under the normal employment rights.

Click here to read our comprehensive guide buying a business out of administration.

If you, as a buyer, want to make changes to the number of staff and/or their contracts, it is best to try to undertake this during the deal-making process, as opposed to after the purchase, as imposing job losses can damage your reputation with remaining staff.

Don’t forget – you are open to Tribunal claims for unfair dismissal if you make changes such as dropping occupational pension schemes afforded to the staff by the former employers. Although you have the right to do so by law, if you fail to provide a comparable pension, you could be sued for unfair dismissal by concerned staff.

In conclusion – it’s imperative that you tread extremely carefully when you acquire a business out of administration, where existing staff are concerned. Remember to consider what these employees have been through and to consider their wellbeing in any decisions you make about the future of your new business.

Great staff are an asset, not a liability – providing you treat them with care and respect and appreciate the value they can add.

No Responses to “Buying a distressed business with existing employees”