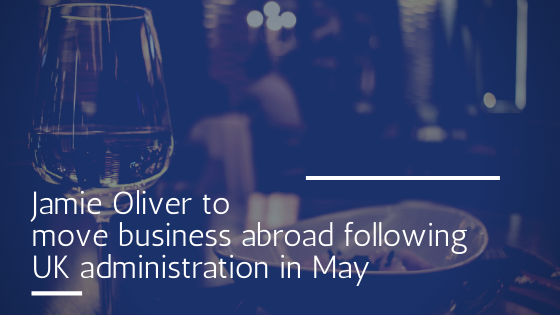 After Jamie’s Italian restaurant chain went into administration in the UK back in May, with 1,000 jobs cut, international franchisees are now planning to open 21 new Jamie Oliver-branded restaurants by the end of 2020.

The Jamie Oliver Group has stated that they plan to boost the number of international restaurants, after the closure of the UK-based ones earlier this year. The group has 70 restaurants, all of which are run as franchises, in 27 markets around the world.

Jamie’s Italian restaurants will be rebranded and will now bear the name “Jamie Oliver Kitchen”. Restaurants are due to open in Bali and Bangkok by the end of November and will be run by group franchise partner HPL.

Another 19 restaurants will be opened abroad next year under several brands, including Jamie’s Italian, Jamie Oliver’s Pizzeria, Jamie’s Deli and Jamie Oliver’s Diner.

All but three of Jamie Oliver’s 25 UK restaurants closed earlier this year, as the firm had been struggling, in the midst of a UK-wide slowdown in the casual dining sector, which also saw Byron and Prezzo announce a substantial number of closures.

Jamie Oliver had paid himself a £5.2m dividend in 2018, and also poured millions of pounds of his own money into supporting his restaurants.

As the UK-based restaurant brand began to fall into administration, a number of reports emerged, suggesting that the chain’s problems stemmed from it being perceived as more of a mid-range restaurant, offering dishes at a price point above those of its competitors, who often offered the same dishes at a much cheaper price.

Consumers tightening their belts and a rise in business rates began to bite, causing profits to fall dramatically this year, at the Jamie Oliver Group – which includes the chef’s media business, as well as his restaurant interests.

The news didn’t come as a surprise to some, as the high street is suffering greatly, with a number of big businesses falling into administration in the last couple of weeks. These continued efforts to push Jamie Oliver’s brand abroad signal the plight of struggling high street shops, as well as brands operating in the hospitality sector too.

This is worth taking note of, as restaurant-based brands, who don’t have the online businesses to compete with as high street shops do, are still feeling the pre-Brexit pinch.