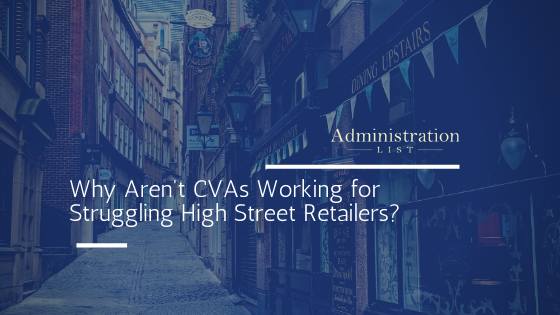 As most of us are aware, the UK’s high streets are struggling, with hundreds of retailers unable to make ends meet. There are a combination of factors at play and a great number of these businesses have been turning to Company Voluntary Arrangements (CVAs) as a possible lifeline.

However, this proves to be a quick fix, as up to half of the retailers that have gone through the CVA process have ended up in administration anyway. So just what is going wrong?

What is a CVA?

CVAs are intended to help businesses that have good prospects moving forward, but which are currently troubled by past debts. CVAs allow for an indebted business to repay a proportion or the entirety of its debts back to its creditors over fixed a period of time – usually between three and five years.

Directors can remain in place throughout the process and, in an ideal world, businesses entering into these arrangements can continue to trade as usual, while they slowly repay the debts that had once been crippling them, helping turn their fortunes around and get them back on their feet.

So, what’s going wrong for retailers?

This is difficult to answer definitively, but the CVA system is certainly not working as it should. Statistics from Colliers International – a real estate firm, show that, out of a group of 23 UK retailers that entered into CVAs since 2016, 13 later ended up in administration.

David Fox, the co-head of the retail agency arm of Colliers International commented: “The CVA was designed to help struggling businesses and to avoid administration by lowering costs, rent roll, undertaking store closures, reducing staff numbers. However, it does nothing to address the high debt levels. That requires restructuring, refinancing and/or debt write-off. As our analysis reveals, for many brands, the CVA, therefore, fails and an administration will result.”

He added that in many cases, a CVA simply “delays the inevitable”, as retailers struggle to adapt to a fundamental shift in consumer behaviour, which means retailers may actually require an entirely new business model in the future.

PwC also carried out some in-depth research into why CVAs aren’t the answer for many retailers. They found that some 15 per cent of all CVAs are entered into by retailers, and that most are launched in the early part of the year after the Christmas period.

Retailers often rely on the Christmas period to bolster their cashflow but if the festive season is particularly slow, they may suddenly realise that they will not get through the remainder of the year without intervention of some kind, hence the CVAs.

PwC also found that around 51 per cent of businesses that enter into CVAs simply find themselves entering into another insolvency procedure, with only 31 per cent of CVAs actually being completed successfully.

What can retailers do and what can buyers learn?

PwC suggests that the changing face of the retail industry in the UK needs a robust response from retailers. They need to look at new business models that help them to adapt to the new way people are shopping. This can include restructuring, but also considering models like subscriptions, selling through online marketplaces and re-sale approaches.

This advice is also worth taking into account for anyone looking to buy a retail business from administration. When you’re taking on a struggling retailer, the key to turning its fortunes around could be down to your ability to adapt to the new normal, with regards to consumer behaviour.

The key to winning over consumers from now on is by enhancing the end-to-end experience. This can include changes in physical stores but also online. PwC says: “Legacy retailers need to redefine their role on the high street by investing in a compelling customer proposition, redesigning their operating models, and funding those investments.”

From an operation point of view, retailers can gain a stronger position against competitors online and on the high street by ensuring quality is extremely high. Investment in shorter lead times and greater speed of service is also likely to help, alongside using tools that allow them to gain a single view of their stock. This can help them offer the right goods to consumers quickly and efficiently.

Consumers are now used to shopping online and never being faced with ‘out of stock’ issues any longer. If they visit a store and can’t get the size or design of a particular item they were hoping to buy, they’ll simply shop elsewhere. Savvy retailers know they now need to offer consumers more choice when they are looking to buy specific goods so that they never leave empty-handed.

Leading a struggling retailer back into profitability isn’t going to be easy in the current economic climate, and CVAs aren’t likely to be the only solution. Instead, retail business owners need to re-evaluate their place in the market and be ready to make major changes to how they work and what they offer to their customers.

If you would like to learn more about distressed businesses that you might wish to acquire, check out the latest in businesses up for acquisition across the UK today.

No Responses to “Why Aren’t CVAs Working for Struggling High Street Retailers?”