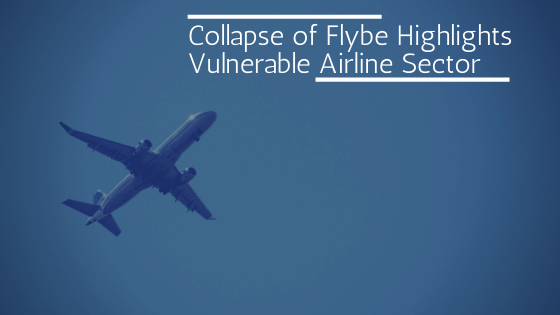 As COVID-19, the official name for the current Coronavirus outbreak, continues to spread around the world, its impact on the global economy is being felt acutely in a number of sectors, especially those related to travel.

The airline industry realised this earlier in the month, with the swift and unexpected administration of Flybe, an airline which had been in operation since 1979. Over 40 years after jetting off for the first time, the airline is now down and out, demonstrating how COVID-19 is not just a shock to the immune system, but to the UK travel sector as well.

Read on to learn more about Flybe’s story here.

Back down to earth

Originally launched under the name Jersey European Airways in 1979, Flybe was first rebranded as British European in 2000, before assuming the name it held when it went into administration on 5th March 2020.

With a fleet of 63 planes, Flybe carried up to eight million passengers between the UK and mainland Europe per year, across 56 separate destinations. The airline was floated in an IPO on the London Stock Exchange back in 2010, when there seemed to be nothing but blue skies above.

The COVID-19 outbreak has since darkened the skies for this airline, having caused global air traffic to be grounded as countries struggle to get to grips with this new and unpredictable virus.

While COVID-19 wasn’t the main cause for Flybe’s collapse into administration, the shockwaves it sent through the travel industry were certainly a catalyst – the airline was reportedly struggling with mounting losses. The Government had been reportedly mulling over a £100 million rescue loan in February 2020, but ultimately opted not to rescue the airline when the time came.

For many years, Flybe was a popular franchise, claiming to be the largest independent airline in Europe, at its height.

Learn more about buying a franchise from administration here.

Impact to be felt across Southampton

One of the places most-affected by the sudden collapse of Flybe is Southampton Airport. This destination derived 90 per cent of its business operations from Flybe flights, with a number of Flybe’s rivals now stepping in to plug some of the more lucrative airways.

Over 2,000 jobs are now at risk as a direct result of Flybe’s sudden descent into administration, but analysts have claimed it could be just the first airline to fall in 2020. Cost-cutting could be a particular issue for some, as those with more limited cashflow could struggle to turn a profit without assistance.

Falling into administration means that customers who booked flights with Flybe will be unable to ask the airline to help book alternative flights. The official Flybe website is now effectively closed permanently, with a statement saying: “This page will not be monitored.”

Flybe Customers have been informed that all flights have now been grounded and they have been advised not to travel to the airport if they booked with Flybe recently, unless they have made arrangements to book a flight with another airline.

Flybe’s administration came quickly and unexpected by many, but future developments in the travel sector need not come as a surprise to you. Subscribe to Administration List to get all the latest information on businesses in distress, to help prepare a potential acquisition.

No Responses to “Collapse of Flybe Highlights Vulnerable Airline Sector”