UK Insolvencies Slide between April and May 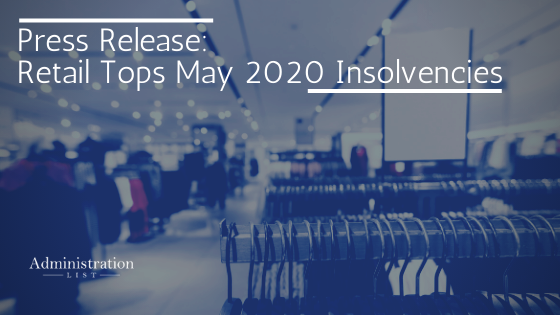 Administration List’s press release for May has revealed a 33 per cent (33.46%) decrease in the level of UK insolvencies between April and May.

In what continues to be a tumultuous and unprecedented second quarter, government relief efforts have intervened to levels not seen since the War Years. According to our data, there were 251 insolvencies in April as opposed to just 167 in May. This would seem to correlate with Chancellor Rishi Sunak’s emergency loans and grants to businesses in the wake of the global pandemic.

Retail remains most besieged from the pandemic’s ripple effect with 57 insolvencies in May, though that number is still some way off last month’s 81 retail insolvencies.

On the other end of the spectrum, the financial sector continues to gasp a welcomed sigh of relief. Since Administration List began recording monthly sector-based reports in February, 15 financial companies were listed as insolvent that month, followed by 21 in March and 24 in April. However, only 9 were recorded in May.

Report of companies listed with Administration List as having appointed administrators or liquidators during May 2020. Data from www.administrationlist.co.uk

May heralded the second full month that the UK spent in lockdown following a dramatic restriction in the movement of goods and services from 23rd March.

In what appeared to be yet another ephemeral respite from Sunak’s economic stimulus packages, businesses that would likely have gone insolvent managed to stay afloat, allowing for a seismic decrease in insolvencies – even in bruised sectors such as hospitality and retail.

It was also another month of big-name casualties with seasoned UK retailer Aldo calling in administrators following a rapid decline in consumer spending. Their inability to diversify with a greater online operation may have played a significant role.

This data forms part of Administration List’s continued efforts to monitor insolvencies across the country and track the impact of the pandemic on our economy.

Report of companies listed with Administration List as having appointed administrators or liquidators during May 2020. Data from www.administrationlist.co.uk

“The high street remains the frontrunner in both administrations and liquidations. With lockdown measures impacting department stores and seasoned retailers such as Aldo, government relief efforts may only serve as a temporary solution to a long-term problem as global economies wrestle with a perilous socioeconomic landscape.

“A small but interesting trend in May is the fall in manufacturing insolvencies. Whilst many industries had no choice but to shut doors, construction was permitted across the UK. Perhaps a business as usual mentality to the once former workshop of the world was much-needed as the UK reassess its reliance on a Thatcherite service sector.

“As lockdown restrictions start to ease, it may be worth tracking the manufacturing industry, and with that, a potential decline in service-orientated professions trading in the UK as workspaces globalise to accommodate remote working possibilities.”

The full data can be found here. Contact and names are visible only for subscribers.

If you use the data as part of your news or content or share the information, please credit Administration List and include a link to www.administrationlist.co.uk

No Responses to “UK Insolvencies Slide between April and May”