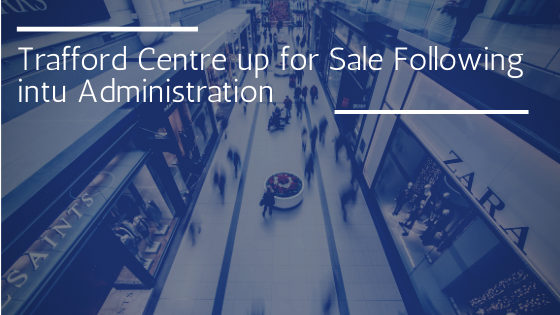 Manchester’s Trafford Centre has been put up for sale by KPMG, administrators of intu. The group has announced that it will continue trading, and that its sites will remain open, with KPMG set to earn £16 million from its management of the administration of intu Properties.

This is after KPMG have been appointed as administrators in June after talks with creditors failed to reach a settlement. Its downfall represents the most significant impact to the retail sector to be felt in the wake of the COVID-19 pandemic to date.

As an indication of the value of the assets, the Manchester shopping centre was last sold 10 years ago, for £1.6 billion; intu value it today at £1.7 billion.

Analysts expect intense competition for this valuable property, however they forecast that it will sell for more than 20 per cent below intu’s valuation.

Intu’s administrators say they are looking to “maximise value for this highly attractive asset”, what this value will be remains to be seen as an asking price has not been revealed by administrators.

If rumours are to be believed CPPIB is hoping for a quick sale, however the Trafford Centre’s bondholders are opposing this as they hold £690 million against the popular shopping centre.

What went wrong for intu?

Intu struggled for a number of months, as we reported in July. In fact intu was on the brink of administration since late June.

The group’s shares have been plummeting for a while. In January 2016, shares were worth £3.50. They since dropped to just £0.50 in November 2019. The reason for the company’s continued downfall and eventual administration has been identified as its extensive debts.

Intu racked up debts of more than £4.5 billion and was unsuccessful in persuading lenders to agree to a freezing of debt repayments, triggering their filing for administration.

The extent of intu’s crisis was revealed by the fact that less than 15 per cent of its quarterly rent bill had been paid when it entered administration.

Intu has 17 shopping centres located throughout the UK and employs around 2,373 people directly. However, through its thousands of stores, the group employs 102,000 people indirectly. The group has a significant impact on regional economies, as it employs so many local people.

The group employs another 30,000 around the country to fulfil its supply chain and it is possible that further insolvencies could follow in a chain reaction.

Trouble for the retail sector?

With so many jobs on the line, intu’s administration will be complex to say the least, and spread a shockwave through the retail sector, which was pushed to its limits during lockdown. Will we see more of their shopping centres up for sale in the coming months?

Since the lockdown period ended there have been some signs that the retail sector is recovering from months of lost trade. It is now two months since retail stores were granted permission to reopen, and data from the British Retail Consortium has shown sales have increased 4.3 per cent in July, compared to 0.3 per cent during the same period last year.

June also saw growth, however the true cost of COVID-19 on the retail sector may not have been felt yet, and with a name like intu entering into administration, we could be set to see some more big retail brands filing for administration in the coming months.

It remains to be seen if the retail sector will be as hard hit as the hospitality sector, Café Rogue and Bella Italia are just two of the recognisable names from the high street to enter into administration recently.

No Responses to “Trafford Centre for Sale Following intu Administration”