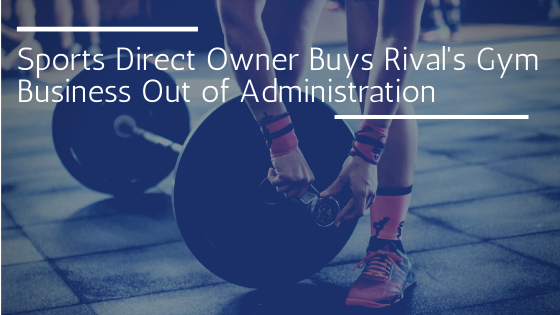 Mike Ashley, the owner of Sports Direct, the nationwide empire of sports clothing and equipment shops, has bought 46 leisure clubs and 31 retail outlets from DW Sports Fitness. The gym and fitness chain went into administration earlier in August. The acquisition sees Ashley buying his long term rival’s business out of administration.

DW Sports was owned by Dave Whelan, the former footballer and businessman, who bought Wigan Athletic for £1 million in 1995. Ashley and Whelan have had a long running rivalry as Whelan once stated that Mike Ashley should keep his businesses out of the North of England.

Gyms and leisure clubs are under pressure post lockdown

DW Sports Fitness’ administration and eventual sale is symptomatic of the wider struggle felt by the gym and leisure club sector after global pandemic enforced closures. Ashley’s Frasers Group yesterday announced that it would buy 77 units in total for a combined £37 million.

Ashley plans to merge the newly acquired businesses into his own business. As a result of the acquisition 922 jobs have been saved from a total of 1,700.

DW Sports Fitness went bust at the beginning of August as its income was cruelly halted by the global pandemic. They are not the only gym or leisure group to be affected, Xercise4Less was recently bought out of administration. So far, the nation’s largest gym groups, including PureGym, The Gym Group and David Lloyd Fitness have survived the lockdown, but for how long will this be the case, after more than three months of lost income?

A complementary purchase for Frasers Group?

Frasers also owns Lillywhites, Evans Cycles and House of Fraser and have said the purchase of DW’s assets would “complement” its own gym portfolio; the group also stated that it would be run under the banner of Everlast.

She continued: “It’s likely to be some time before people bound back to the gym in greater numbers and is yet to be ascertained whether this latest acquisition will have been the right choice for the company.”

DW also own gym chain Fitness First which is not involved in the administration.

Recent struggles for Frasers and DW

DW made a loss of £20 million for the year ending 31st March 2019, so perhaps the pandemic has only accelerated its financial difficulties which led to its eventual administration and sale.

Frasers, hasn’t had things easy either; it has struggled desperately throughout the pandemic and described this financial year as “the most challenging in its history”.

Although its sales have increased marginally, profits have plummeted by 20 per cent to £143.5 million due to House of Fraser store closures. And the group expects more stores to close in the coming months, which could mean job losses.

Frasers has shut 10 of the 59 stores it bought in House of Fraser’s 2018 administration.