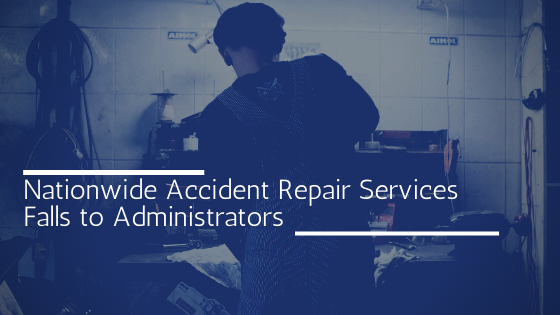 Nationwide Accident Repair Services has entered administration following a sharp decrease in trading volumes, according to one of its administrators.

Rachael Wilkinson and Rob Lewis of PwC were appointed joint administrators of Nationwide Accident Repair Services (NARS) in addition to a number of the company’s subsidiaries.

“As with many other businesses, the group had to weather major financial fallout due to the economic impact of COVID-19, which meant that trading volumes were significantly reduced.

Against that backdrop, the sale announced today reflects a significant positive outcome for the business, and we are especially pleased to have safeguarded 2,350 roles including apprentices, mechanics, and technicians.

Sadly we have had to make 540 staff redundant. We are making every effort to support those workers. This includes providing guidance for employees regarding JobCentre Plus and Redundancy Payments Service processes.”

The Oxfordshire-based company had made a healthy return servicing a large percentage of the UK’s accident repair insurance firms, and had done so since the company’s formation in 1993 before government lock-down measures saw an unprecedented decrease in the number of vehicles on the roads.

The administration includes the extensive sale and transfer of a large share of the group’s business and assets to RunMyCar Limited, a subsidiary of Redde Northgate plc.

The move is thought to have protected around 2,350 roles across the firm’s 80 garage and office sites, although 540 employee roles will still be made redundant.

The news is likely to have harsh knock-on effects on several automotive businesses operating within the same space, some of whom personally lent money to NARS according to Steve Freeman, a senior partner at accountants MacIntyre Hudson.

Speaking to CarDealer, Hudson said, “We have been in communication with many of our dealer and OEM clients and networks since Friday and understand that a number of dealers have sold parts to Nationwide and are owed money for the supply of these parts.”

This is likely to prove just the beginning of a potential number of ripple effects, a likelihood joint administrator Rachel Wilkinson knows all too well.

“Companies across the automotive sector are still recovering from an extended period where activity ground to a halt, significantly depleting cash reserves.

“Some are only reaching a fraction of pre COVID-19 volumes despite reopening outlets. Consequently, the sector is set for a make or break rebalancing period over the next few months. Refreshed lending agreements, cash conservation, and supply chain management will be key.”

The 27-year-old company once repaired around 300,000 vehicles annually, according to its now-defunct webpage.

The news comes after a series of appointed bankers working for The Carlyle Group failed to find a buyer for the ltd company.

No Responses to “Nationwide Accident Repair Services Falls to Administrators”