Tossed Bought out of Administration by Management Team 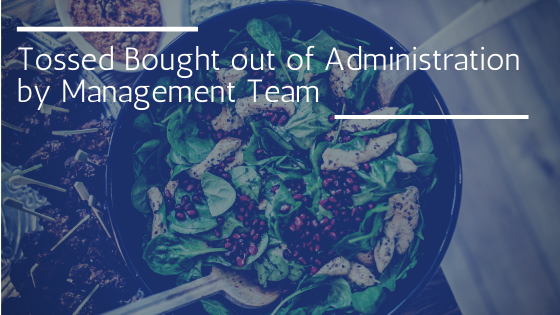 Healthy eating fast food chain Tossed, has been bought out of administration by its management team. The management buyout will see six stores continue trading, after BNW Food, a new venture launched by the Tossed management team acquired the retail units from administrators Quantuma.

Tossed was placed into administration in late June alongside Vital Ingredients, as parent company, Zest Foods appointed Quantuma to manage its administration.

Tossed was hit hard by a fall-off in footfall during the spring and summer months, as a result of the COVID-19 pandemic. As a healthy eating fast food chain often based in commercial areas, Tossed relies heavily on the work lunchtime trade, but the business was forced to close stores temporarily during the pandemic.

As the lockdown measures eased, Tossed reopened four of its stores on a trial basis in June, but were forced to close them again after a lack of custom.

All of Tossed 260 staff were made redundant in the administration.

A history of Tossed

Zest Foods was founded in 2004, and had 20 stores in Central London, with Tossed making up 14 of their outlets. The group had huge ambitions, acquiring Vital Ingredient in 2018 as part of a plan to forge ‘one of the largest healthy eating groups in the UK’.

Zest Foods turned over £17.9 million in the year to 31 March 2019 and would have been anticipating another successful year before the curse of 2020 struck.

Neil Sebba and Angelina Harrisson, previously managing director and commercial director of Zest Foods, now are looking to turn around the fortunes of Tossed with their new business venture BNW Food.

After initially acquiring six stores from administrators Quantuma, they hope to reopen more Tossed locations in the coming months. It is expected that at least 50 jobs will be created by the resurrection of the brand.

The reopening of Tossed locations will begin with a soft launch at their Clerkenwell location in October, it’s planned that more stores will open in the weeks following. A delivery kitchen at Foodstars Battersea will also be opening to serve home deliveries in light of the reduced footfall to casual dining locations.

Of BNW Food’s buyout Neil Sebba comments: “Angelina and I are delighted to be given the opportunity to save this wonderful brand, and hope to create at least 50 new jobs in the coming weeks. We are thrilled that Londoners will still be able to get their Tossed fix, either in person, when they return to their offices, or on delivery.”

He continued: “No doubt the winter trading in London will remain extremely difficult as the Covid-19 situation unfolds, but we are working with a group of landlords and an administrator who have approached this crisis collaboratively. This is refreshing, and speaks volumes for the strength of our brand and our plans for its reopening and beyond.”

Simon Bonney managing director of administrators Quantuma ventured: “With such a tough trading environment in London, it’s great to have delivered a successful outcome in conjunction with a strong management team, and to have secured a future for the brand in these difficult times.”

No Responses to “Tossed Bought out of Administration by Management Team”