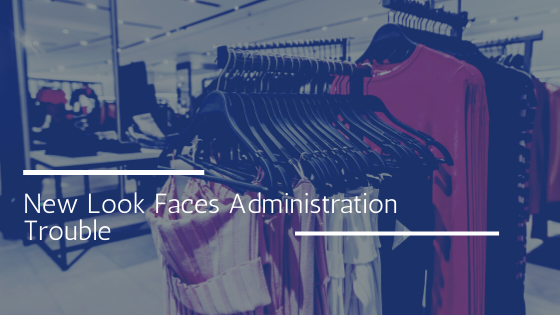 Struggling British retailer New Look is facing the prospect of administration after admitting that it will “have to consider less favourable alternatives” if the fashion retailer’s company voluntary arrangement (CVA) is not accepted by its unsecured creditors.

Though the high street brand has received “overwhelming support” in regards to the financial recapitalisation transaction from its secured financial creditors, the fate of the ill-fated retail chain relies on the transaction being supported by 75% of the group’s unsecured creditors. A meeting is scheduled to take place concerning the matter on the 15th of September.

The news comes following a significant decrease in high street consumer spending after the government’s strict lockdown measures in March. In the wake of this, the recession-stricken fashion brand aimed to overcome this with a CVA outlining its intentions that 402 of its stores’ leases would be set at a turnover percentage of up to 12 per cent whilst 68 remaining stores would move to zero rent.

However, the company’s sales process failed to attract a buyer, leaving their fate in the hands of landlords and creditors.

A spokesperson for New Look added that the “magnitude and speed of consumer behaviour and confidence” following the economic fallout of the Covid-19 pandemic has caused the company to act swiftly to “ensure continued business viability”.

It is company bosses’ hopes that the transaction would lend the ailing womenswear brand “financial strength, funding and flexibility to allow New Look execute on its strategy and deliver its three-year business plan”.

£40m investment to save New Look

On top of a short-term stimulus, executives are hopeful the benefits will trickle down into the long-run by decreasing New Look’s long-term debt from £550 million to £100 million of bank facilities, whilst also giving the company access to an operating facility of £70 million. They are also hopeful the transaction will spawn a fresh cash investment of £40 million to invest straight into the business.

The group continued: “If the vote is successful, the financial restructuring can be concluded. If unsecured creditors do not support the company’s CVA, the directors of the company will have to consider less favourable alternatives than the current transaction for the group’s stakeholders including its creditors (including those unsecured creditors), customers and employees.”

Found by Tom Singh in 1969, New Look would go onto become a mainstay fixture on British high streets and around the world with some 900 stores globally. Only last year, the company recorded operating profits of £33m.

In May 2015 the company would be acquired by South African Group Brait SA for £780 million. However, just three years later the company experienced declining sales, with 90 stores in the UK closing in 2018 alone.