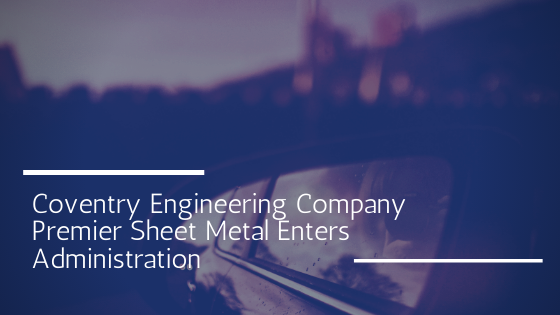 The limited company, owned by Premier Group, manufactured sheet metal parts for the automotive sector, but with the recession-stricken industry one of the worst affected in the wake of the coronavirus, the company had little choice but to close down operations.

As per the BBC report, the business blamed “conditions within the automotive sector which were further compounded by the onset of Covid-19” for their closure.

The news comes as the automotive industry recorded its worth figures in years, with the first six months of the year seeing the manufacturing of cars sink to their lowest levels since 1954.

The knock-on effect of this naturally led to a rapid decline in demand for vehicles, leaving companies such as Premier Sheet Metal in a precarious position.

Founded in 1992, the company would quickly establish itself as a market leader in the bespoke manufacturing of production panels, assemblies and prototypes, with clients ranging from Bentley and Aston Martin to Rolls Royce and The Ford Motor Company.

In 2012, the company was responsible for the 8,000 torches used in the traditional relay ceremonies in the lead-up to the Olympic Games in London.

In the wake of the administration, a company spokesperson described “the absence of any certainty in the marketplace” as a major factor in the company’s decision.

“As a result of the deteriorating market conditions within the automotive sector which were further compounded by the onset of Covid-19, the company was forced to close all of its operating facilities together with the suspension of all production activity.

“The effect of this has been to severely impact the company’s short term cash flow position and although the shareholder has made substantial cash injections into the company in an effort to keep it afloat, this proved insufficient, particularly as they were not able to secure other funding necessary to enable the company to continue to trade, largely due to the absence of any certainty in the marketplace

“Following a review of the company’s financial position and cashflow requirements by the company’s advisors, it became apparent that Premier Sheet Metal (Coventry) Ltd could not generate sufficient sales and in turn cash flow to enable it to continue to trade,” he added.

“Therefore, very regrettably, and after a period of over 25 years of trading, the decision was taken to commence the process of placing Premier Sheet Metal (Coventry) Limited into liquidation.”

Despite the announcement, other companies within Premier Group remain unaffected.