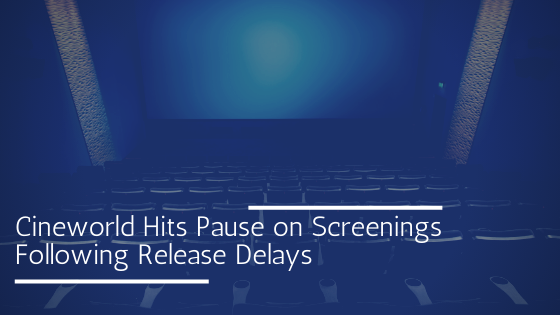 Cineworld has decided to hit pause on operations for a temporary basis, meaning the cinema chain will close more than 100 Cineworld and Picturehouse venues in the UK. It remains unclear precisely how long Cineworld intends to close its cinemas, but 2020 has already hit the chain hard.

The recent announcement regarding the delayed release of the latest Bond film, No Time To Die, is being cited as a possible factor for Cineworld’s decision, with the film not expected to be released until April 2021, over a year after its original intended release date.

Delays to releases have weighed on cinema chains all over the UK, especially with studios like Disney opting to subvert cinemas entirely, releasing new movies including Mulan exclusively onto their streaming services.

Markets reacted adversely to the news from Cineworld this weekend, with share prices falling 50 per cent in a single trading session. Employees took to social media to decry the prospect of losing their jobs.

One of the leading causes for Cineworld’s decision to temporarily close its branches is what the Cineworld CEO dubbed “an increasingly challenging theatrical landscape”, with major markets including the US showing low demand, and a lack of new films being distributed for general release by studios.

Having to close its screens might also be a symptom of Cineworld’s recent financial issues. In August 2020, the Telegraph newspaper revealed that the chain was among several high-profile brands that had refused to pay rent to landlords during the ongoing coronavirus crisis.

It is understood that Cineworld held debts with a value of up to $3.5 billion, excluding leases.

The final frame for Cineworld?

Cineworld’s woes aren’t necessarily the end of the story, provided that the chain is in a position to renegotiate the terms of its leases with landlords over the coming months. As recently as 2018, Cineworld was considered one of the UK’s top-performing cinema chains, listed as having the greatest market share in terms of revenue.

For the past few months, Cineworld has been given a moratorium on lease forfeiture and debt enforcement, but the government wound up this moratorium in September. The decision to close its doors temporarily may simply be a tactic to regain some time to get Cineworld’s finances in order or simply stall a possible need to call in administrators.

Concerns started to be raised in March 2020 regarding Cineworld’s leases. Not long before the lockdown was first implemented, it was indicated that the chain was at risk of breaching its debt terms, if it had to close its doors for up to three months.

Cineworld is a major player in the UK cinema sector, and its ultimate fate rests in whether it remains healthy enough to bounce back from the current turmoil or whether it’s the final curtain call.

To stay up to date on all the latest developments regarding the administration and liquidation of businesses across a wide range of sectors, subscribe to Administration List today.