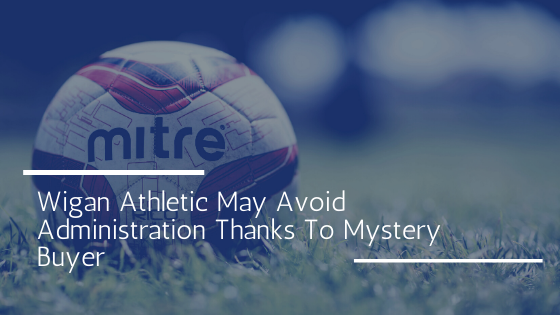 English football club Wigan Athletic has been rescued from administration from an unnamed Spanish investor, according to the accountancy firm Begbies Traynor, the League One club’s administrators.

The mystery investor has reportedly invested “a substantial deposit” into the Latics, according to joint administrators Gerald Krasner and Paul Stanley. Reportedly, the investor is thought to also have some experience in the footballing world.

However, Krasner and Stanley failed to divulge any additional details surrounding the investor’s background, and have instead granted the buyer complete anonymity until the purchase officially goes through.

An official statement released last week from the administrators revealed:

“The bidder has committed to buying the club and paying the minimum 25p for every pound owed to “non-football creditors.”

The news spells good news for the club, both on and off the field. If the acquisition goes through, the club could play out the League One season without a points penalty, something that was not the case last season.

The club – which had once enjoyed an eight-year spell in the English Premier League – experienced an agonising relegation from the English Championship following a 12-point deduction, owing to the club’s ongoing issues with creditors.

However, news of a potential saviour for the quaint Northern football club is nothing new.  In July, an offer tabled for the club failed to materialise. At that time, Krasner revealed the club owed around £6 million to non-football creditors.

As per English Football League (EFL) rules, Wigan’s football creditors must still be paid in full. This includes player wages, as well as transfers of funds and other payments.

The news comes after administrators for the troubled football club said in August that they were seeking £4 million to sell the club along with its DW Stadium. An additional £5 million was also needed to cover costs for the then-upcoming season and the subsequent one.

If the purchase is confirmed, Wigan Athletic’s future as a professional football club will be secured after a shock descent into administration on the 1st of July.

News of the club’s administration caused uproar online and spawned a scathing attack on the owner by the sports website The Athletic in a piece titled, ‘How Wigan Athletic were torn apart by an invisible owner.’

Despite this, the club’s administrators maintained that there was “nothing to substantiate any allegations [of wrongdoing] against Mr Yeung.”

A preferred bidder from Spain

“We are pleased to announce that we have reached agreement with a preferred bidder from Spain,” the official statement claimed.

The offer that has been accepted deals with not only the sale of the club but also allows the payment to non-football creditors, to avoid the 15-point penalty this season. In addition, a substantial deposit has been received.

We are now working with our lawyers and the bidder to produce all of the necessary paperwork to submit to the EFL so that successful transfer of the football share can be made at the earliest opportunity.”