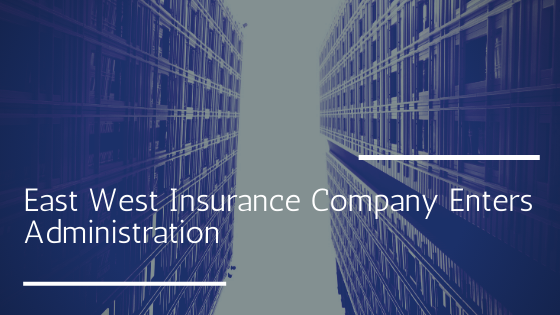 However, their administration is not believed to be related to the COVID-19 pandemic, but instead due to “an unprecedented set of claims” according to EY, leaving the company unable to pay off its existing debts.

News of the administration was broken by the Financial Conduct Authority (FCA), which announced:

“The firm has ceased writing any new insurance, and has been focused on claims management and run-off. The firm had a range of insurance policies including building guarantee policies.”

The firm’s directors reportedly worked hard to try and find a solution to the company’s then-imminent administration but a solution was not forthcoming, pushing EWIC into the hands of administrators.

“If you are an East West policyholder, the administration of East West doesn’t automatically end or cancel your contract of insurance, and you’ll be covered by the Financial Services Compensation Scheme if you’re an eligible policyholder.

Commenting on the administration, a spokesperson for the FCA said the now-defunct company will continue to be regulated by both the FCA and the Prudential Regulation Authority (PRA).

“It remains subject to supervisory oversight and the PRA’s and our rules”, the spokesperson claimed.

“The administrators are officers of the court and need to comply with all insolvency law. The individuals appointed are authorised to act as licensed insolvency practitioners by the Insolvency Practitioners Association.”

Established in 1964, EWIC’s main area of expertise was the handling of 10 to 15-year structural defect policies.

A slippery slope for insurers

However, almost 60 years have passed, and the buildings guarantee insurer’s struggle in dealing with the number of high-value claims is perhaps a tell-tale sign of the precarious position insurers find themselves in at the height of a prolonged global recession.

Whilst the administration was not related to the coronavirus pandemic per se, news of EWIC’s woes will perhaps invite further analysis of EWIC’s liquid reserves – or lack of them entirely.

An official statement by the administrators read:

“In recent months, EWIC has received a number of unexpected high-value new claims, as well as material increases in the value of existing claims.

Current claims will now be handled by Armour Group.