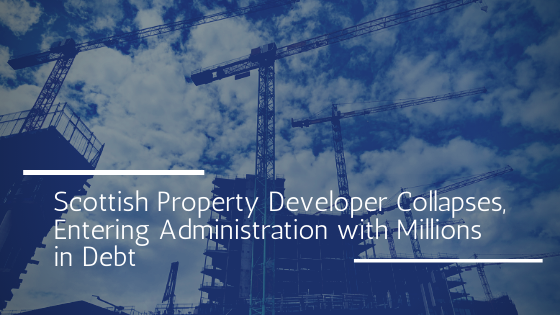 BPL1 Ltd had been planning an extensive development at a site in Ringford, Scotland. However, in light of the significant debts the developer has accrued, financial experts Moorfield Advisory have been appointed administrators in order to recover assets and funds for their creditors.

Moorfield Advisory, London-based financial consultants, have been appointed as a result of BPL1 Ltd failing to pay back more than £3.7 million in loans.

The developer’s plans to build 444 chalets on a site in the small village of Ringford have been beset by obstacles from the very start.

The administrators Moorfield Advisory will now focus on selling the plot as development land.

A development fraught with problems

Proposals to build almost 450 chalets on the plot were lodged in 2012. By 2014, Barncrosh Leisure Estates Ltd was granted planning permission to begin work.

Following this, the company went through a series of name changes: becoming first Barncrosh Leisure Retreat Ltd in 2015, following this, the organisation was renamed to Belvedere Leisure Park Ltd in 2018, before finally settling on BPL1 last summer.

These name changes perhaps reflected the turmoil faced by the firm. The planned development was subject to opposition from its very earliest days. Tongland and Ringford Community Council objected to the firm’s original planning application.

The council’s Chairman said: “If it was far from suitable when approved and investment capital didn’t advance to construction during more prosperous times, one wonders on what basis in an economic crisis the proposal for altering the build schedule yet again could justify the project as being remotely sustainable?”

The proposal filed by administrator Moorfield Advisory with Companies House lists that the purchase of the land plot was financed by a loan from MoneyThing (Security Trustee Limited).

Two further loans were extended to demolish the farm buildings on the land and to begin construction of the chalets.

BPL1 had not achieved planning permission by the time loans had matured, and construction never started in the end. The only work carried out on the plot was the demolition of the existing farm buildings.

These circumstances caused their debts to mount. By the time the administrators were called in, BPL1 Ltd owed more than £3.7 million to MoneyThing, while they also had debts of £107,000, owed to NCM Fund Services Ltd.

Moorfields summed up the situation in their administration proposal: saying there “is no real prospect of commencing the development in administration”, hence their recommendation for selling the land for further development by another party.

In order to sell the land, the administrators applied to renew planning permission, but have made clear that creditors will collect “a shortfall from the realisations of the property”.

What’s in store for potential buyers?

The administrators have said that the company’s balance sheet from March states that the land is worth over £5.6 million. However, they caution that current market value is less than this figure.

No Responses to “Scottish Property Developer Collapses, Entering Administration with Millions in Debt”