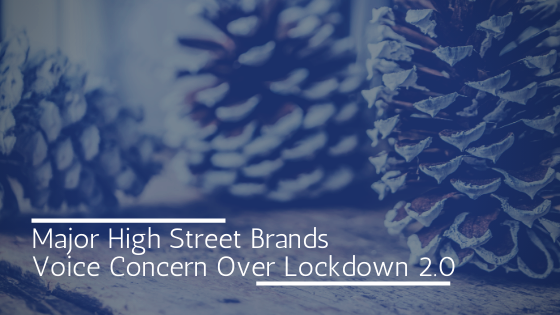 The likes of M&S, JD Sports and Carphone Warehouse are just some of the 60 signatories to an open letter voicing concern about an extension to the current lockdown in the UK.

Published by the British Retail Consortium (BRC), the 60 high street retailers urged the government to give assurances that shops could re-open by the first week of December, or risk losing a large volume of branches altogether.

Billions on the line

The BRC’s letter claimed that businesses were already feeling the heat from the sustained closure of shops ever since the second national lockdown, which came into effect in the first week of November. The lockdown was implemented with the intention of being lifted by the first week of December, on condition that COVID-19 case numbers began to fall to manageable levels.

Helen Dickinson, Chief Executive of the BRC, explained the predicament of many retailers, saying: “The closure of thousands of retailers is compounding the challenges facing our high streets. ‘Non-essential’ stores are estimated to be losing £2 billion per week during lockdown – yet rents continue to mount and the business rates cliff edge is looming.”

Ms Dickinson was referring concerns about a potential combined bill of £8 billion in business rates due to be paid by retailers over the course of 2021, unless action was taken to support retailers. By ensuring retailers could re-open by the first week of December, Ms Dickinson claimed they could benefit from a boost in sales during the pre-Christmas shopping period.

Since the start of the pandemic, the Office for National Statistics (ONS) has begun publishing experimental weekly figures, indicating the volume of footfall across the UK. Using the pre-lockdown period as the baseline at 100 per cent capacity, the ONS reported that footfall is now 33 per cent of what it was this time last year.

The recent slump in footfall comes at an unfortunate time for retailers – after slumping to just a fifth of its usual volume in April, high street footfall recovered gradually over the summer. It had managed to rise close to 80-90 per cent capacity in the weeks just before lockdown measures were reintroduced across England.

Tighter restrictions during the pre-Christmas period mean more shoppers may resort to using online retailers rather than risk a trip to brick and mortar shops. The final three months of the year are typically the most important for any retailer – British shoppers generated £78.58 billion in Christmas sales (both online and offline) in 2019, according to data from Retail Research.

Ultimately, the fate of many high-street businesses will depend on a very specific chart for the time being – the number of new COVID-19 cases. Officially, new daily case numbers are estimated to be over 25,000 on a seven-day moving average basis. As we saw over the spring and summer, a true high street revival can only be guaranteed if we flatten the COVID-19 curve once more.