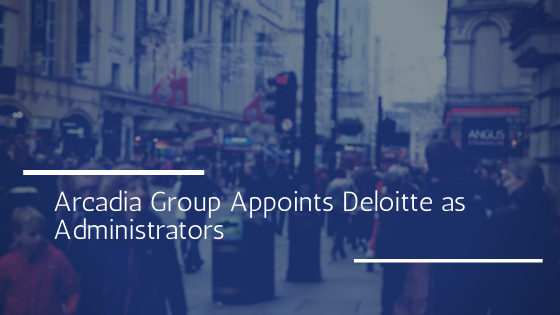 Controversial businessman Sir Philip Green, doyen of high street fashion, has appointed Deloitte as administrators for his Arcadia Group. The group owns some of the biggest names in high street fashion in both womenswear and menswear.

The group’s key brands include Topshop and Topman, womenswear labels such as Miss Selfridge and Evans, plus menswear brand Burton.

What does Deloitte’s administration statement reveal?

In a statement made on Monday evening at 8pm, Deloitte announced they have been appointed administrators for the Arcadia Group.

In their statement Deloitte clarified that no redundancies have been made: “No redundancies are being announced today as a result of the appointment and stores will continue to trade.”

The big four accountancy firm stressed that it would assess all options open to the group. On top of this all the group’s operating channels will remain open.

Deloitte have also assured consumers that all online orders made during the Black Friday weekend would be honoured.

Sir Philip Green, despite his knighthood, is one of Britain’s most controversial businessman. With the appointment of administrators from Deloitte, the mogul’s reign as the king of high street fashion could be set to end.

Arcadia fell to administrators on Monday night. The group’s  collapse is believed to have hinged on an unsuccessful application for emergency credit. Arcadia was talking to a number of lenders about accessing an emergency £30 million loan. However, with the group being unable to secure the funding they required, their collapse into administration proved inevitable.

As a result, 13,000 jobs are on the line in what has proven a nightmarish 2020 for the beleaguered high street.

The latest ONS figures show job losses grew  to 4.8% in September, and the Office for Budget Responsibility thinks it could rise as high as 8% next year.

What are the next steps?

Deloitte are as yet to make any redundancies, but there are very real fears that Arcadia’s 13,000 strong workforce will face severe job losses in the coming months.

Creditors circle with all eyes on Arcadia’s assets

With the group’s insolvency confirmed creditors are lining up to get a slice of the group’s assets.

Arcadia’s pension scheme will likely lay claim to the largest share of the group’s assets, when Deloitte begin dividing up the company’s remaining balance sheet assets. Topshop and Topman are the group’s most valuable brands, which will mean buyers will be ready to swoop in as soon as possible – the deals for these flagship brands are expected to be worth several hundred million pounds combined.

The Boohoo group, Next, JD Sports Fashion and the seemingly omnipresent Mike Ashley, operating under the auspices of Frasers Group are likely to be heavily involved in the auction for the brands, which could be completed in mere weeks according to Sky News.

Ashley run Frasers Group this morning announced its decision to pull out of a rescue for Debenhams, the struggling department store. This may well signal his intent to bet big on Arcadia’s collapse.

What’s in store for potential buyers?

The aforementioned administration plan will allow Arcadia’s online shopping and the physical stores to open to trade as normal, which may mean bargains on offer for Christmas shoppers.

With a curtailed Christmas schedule this year due to lockdown restrictions, there may be a disproportionately large Christmas rush on the high street compared to previous years for those lucky to find themselves in the tiers which allow them to set foot inside physical stores.

In some good news for consumers and retailers alike, non-essential shops were given the greenlight to open when lockdown ends on December 2nd, as revealed by Prime Minister Boris Johnson in a recent national address.

With a growing list of creditors lining up around the block, those with a claim on the Arcadia Group’s assets will have to move quickly, as will potential buyers of Arcadia’s big name brands.

We will of course continue to report on the developments of Arcadia’s administration, the selling of their assets and any movements from potential buyers for their flagship brands.