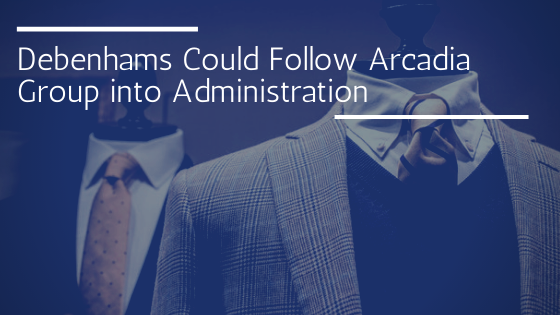 The retail sector is waking up to the news that struggling high street brand Debenhams could be about to enter administration, after it emerged that Arcadia Group had collapsed overnight and that JD Sports was reportedly considering pulling out of a planned takeover.

This latest breaking development comes just days after reports emerged that Arcadia Group was about to collapse into administration, after many years of financial difficulties.

The group was vulnerable to the woes of Debenhams, as it was one of the largest holders of concessions within the retailer’s stores. Arcadia’s financial difficulties largely stemmed from it having a sizeable pensions deficit estimated to be worth several hundreds of millions of pounds.

Debenhams on the line

Founded in 1778, Debenhams has been a fixture on British high streets for generations. JD Sports was reportedly mulling a rescue deal with the retailer, which would have required the closure of up to 60 stores across the UK. Debenhams employs 12,000 people, so a significant number of jobs could be on the line.

The struggling brand had been searching for buyers after falling into administration back in April, the second time this has happened in just one year. One of the difficulties with JD Sports making such an acquisition would be how they manage the large outlets.

Debenhams has been famed for its large-scale department stores, and some imaginative ideas would be required from whoever bought them up, in order to fill the spaces.

A tricky year for retail

One thing is for sure in 2020 – retail has been at a phenomenal disadvantage over the course of the past year. Arcadia Group held significant control over big ticket brands including Topman, Topshop, Burton and Dorothy Perkins. However, a slowness to adapt to the digitisation of retail from the group has led to underinvestment in online capacity.

Low profitability plus the hefty pensions deficit dominated Arcadia Group’s financial affairs, hindering their ability to invest further, creating a negative spiral. As Arcadia Group collapses, as many as 15,000 jobs could be lost, at a time when unemployment in the UK is already beginning to spike.

In its latest tranche of jobs data, the Office for National Statistics reported that unemployment had risen to 4.8 per cent in September 2020, confirming that the COVID-19 recession was finally hitting the jobs market. This all comes despite record government assistance through the jobs retention scheme.

No Responses to “Debenhams Could Follow Arcadia Group into Administration”