Derby County Football Club, AKA ‘The Rams’ Could Be Charging Towards Administration 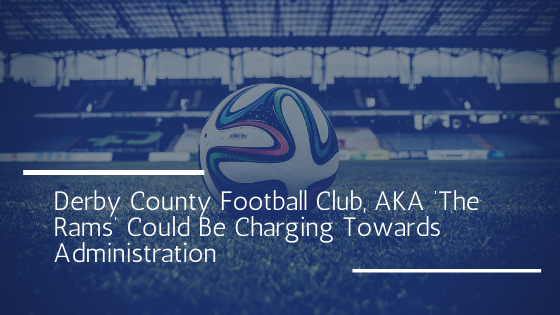 Derby County Football Club takes its nickname ‘The Rams’ from its connection to the First Regiment of the Derby Militia. This is fitting because Derby County are certainly under fire at the moment, with the potential to crash into administration in the near future.

It all comes down to the club’s cashflow problem, which has left its players out in the cold. In December, they only picked up half of their pay packet.

Complicating the picture is a potential takeover of the club which has been on the cards since November 2020. If the club does go into administration, there are creditors circling to lay a claim on the club’s assets.

It all hinges on a potential takeover from Abu Dhabi Royal

As mentioned, a deal has been on the table since last November. The hold up in the sale talks came to light in November, after the news rolled off the presses that Khalid bin Mohammed bin Zayed Al Nahyan appeared ready to take up the mantle of ownership from its owner, Mel Morris.

If the deal does eventually go through, it will be under the auspices of Derventio Holdings (UK) Limited. Derventio is owned by the Sheikh, who is a cousin of Sheikh Mansour, the owner of Manchester City Football Club.

Despite Derventio having passed the English Football League’s owners’ and directors’ test, demonstrating the Sheikh to be an appropriate owner, the deal is still in doubt.

The Sheikh appears to have been put off due to the club’s wage crisis, which is linked to pervasive debts throughout the company, stemming from unpaid loans from US financiers MSD Holdings. The company lent £30 million to Derby and have stated their intentions of owning the club, should the opportunity present itself.

What’s next if the deal doesn’t proceed?

If Mel Morris in unable to sign the deal, the club will be set for administration, or be handed over to MSD Holdings, as the club’s main creditor.

Morris is currently paying the club’s bills from his other businesses. The reason why administration remains a very real prospect is because several deadlines of the timeline for the proposed deal have been missed.

How serious is Derby’s wage crisis?

The club has stated that they may have to sell off assets to avert the wage crisis. They’ve put other clubs on notice that young players Jason Knight and Louie Sibley could be sold to ensure the staff’s wages can be covered.

The team, featuring ex-Manchester United and England Captain Wayne Rooney, is currently struggling at the foot of the Championship table, the second division of the English Premier League.

The Rams were also beset by the COVID-19 pandemic in 2020, as a number of first-team players and staff tested positive for the virus.

They have yet to announce their annual financial results for the year ending June 30th 2019, so the extent of their financial problems is yet to be fully revealed.

No Responses to “Derby County Football Club, AKA ‘The Rams’ Could Be Charging Towards Administration”