Next Could Be Set to Buy Topshop Owner Arcadia 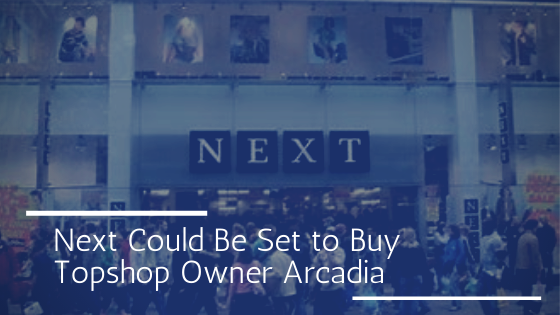 We reported at the tail end of November last year that Arcadia, the Philip Green-owned high street fashion group, was set to go into administration. Ultimately, the group did enter into administration just a few days later, on the first day of December.

At the same time, a potential bid from department store mainstay Debenhams was on the cards. However, this deal fell through, after Debenhams itself collapsed into administration.

Now Next, among other well-known retail groups, are lining up bids to take over the ailing group. The Press Association reported on Monday 18th January that final bids were expected the same day. However, some flexibility was built into the deadline by administrators Deloitte, due to the ongoing circumstances.

How much will bids be worth?

Deloitte’s appointed administrators are expecting to receive bids worth over £200 million, in a competitive battle to seize the group’s assets, key retail locations, and a number of valuable high street brand propositions including Dorothy Perkins and Wallis.

Next appears to be first in line to take over the group, as reported in the Retail Gazette. It is understood that Next have placed a bid to assume ownership of Arcadia, in collaboration with US hedge fund Davidson Kempner.

As mentioned, Next isn’t the only group in the running, although they seem the most likely winners as things stand. Competition is strong, as JD Sports are still in contention, after launching a joint bid with New York-based brand management company Authentic Brands.

Which brands will up for grabs in the deal?

Reports have circulated that Boohoo’s bid won’t include Arcadia’s real estate assets – this is the approach they followed with their takeovers of Karen Millen, Oasis and Warehouse. Boohoo is known as a fast fashion e-tailer, so their reluctance to take on costly retail rents is understandable.

Since the Philip Green owned group went into administration at the beginning of November, only women’s fashion retailer Evans has been bought. It was sold to fellow plus size retailer the Australian-based plus-size retailer City Chic. The deal was worth £23 million, however the brand’s stores weren’t acquired.

Moreover, another Arcadia-owned brand, Outfit, has closed all of its 21 stores, in cuts following the administration.

So, with Evans having been sold and Outfit stores being permanently closed, Arcadia’s remaining brands include Dorothy Perkins, Wallis, Burton, Miss Selfridge and the diamond in the crown, Topshop.

The news doesn’t get any brighter for the beleaguered group’s owner, Philip Green. Arcadia’s pension fund deficit is estimated at £350 million, and as in 2016, when BHS collapsed, Green is being urged to make up the difference, with contributions from his own finances.

Phillip Green most notably advised David Cameron on public sector waste during his time in Number 10.

What are Next’s plans if the deal goes through?

Reports are emerging that Next, if successful, would cooperate with current management to attempt to keep the doors of as many Arcadia-owned stores open as possible, subject to striking deals with the current landlords.

In 2020, Next, run by Conservative peer Lord Wolfson, agreed licensing deals with Victoria’s Secret and Laura Ashley, after they both collapsed into administration.