Analysis: Boohoo’s Debenhams Deal and Asos-Acardia Talks Could Cause Irreparable Scars to the High Street 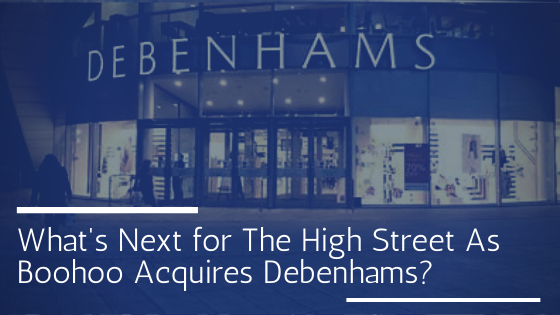 This week has seen dramatic acquisition developments for some of British retail’s biggest names. It was confirmed on Monday this week that Boohoo, the online fast fashion retailer, has acquired Debenhams in a deal worth £55 million. Meanwhile, Asos is in exclusive talks to purchase various brands from the Philip Green owned Arcadia Group.

Both the confirmed Boohoo deal and the Asos talks in progress do not include the retailer’s high street infrastructure. Boohoo and Asos, pioneers of fast fashion ecommerce, are looking to use the acquisitions to bolster their online presence.

In total 20,000 jobs are set to be lost as a result, with a likely 12,000 from the Debenhams sale alone. Before the stores are shut entirely, they will reopen as soon as COVID-19 restrictions allow, in order to sell off their remaining stock.

Could we be seeing a changing of the guard in retail, with more retail businesses going into administration providing targets for online retailers? Is this a sign that online retailers are gaining confidence to realise more lofty ambitions? The likes of Boohoo and Asos have deep pockets, and with the devastating impact of the pandemic on the high street over the last year, we could continue to see deep scars opening on British high streets.

So, what’s next for the ailing high street?

Part of the deal to buy Debenhams’ brand and website includes snapping up the retailer’s Maine, Mantaray, Principles and Faith labels. Debenhams’ 243-year presence on the high street will soon come to an end as a result of the company going into administration in late 2020, while the mere 15-year-old fast fashion e-tailer will benefit from the respected department store’s brand associations, supplier relationships across sectors and popular website.

Boohoo meanwhile have been surrounded by controversy over the last few years. The e-tailer has faced criticism for poor working conditions in various elements of its supply chain. The Guardian revealed that factories in Leicester were not paying workers the minimum wage and were also compromising the health of factory staff during lockdowns in the ongoing pandemic.

Despite evidence revealed by the Guardian of Boohoo’s substandard treatment of its factory workers in the UK and overseas, they still fulfil a huge demand for affordable fashion that quickly pivots with changing trends and seasons.

This is Boohoo’s fifth such acquisition of a failing high street brand in the last 12 months, during which they have already bought Warehouse, Oasis, Coast and Karen Millen. These moves came after raising £200 million in May last year, at a point when high street fashion brands were reeling from the effects of pandemic-enforced store closures.

After the Debenhams sale was announced, Boohoo’s shares jumped 4.7 per cent, propelling the value of the business to £4.4billion.

Where next for Boohoo?

Mahmud Kamani, Boohoo’s co-founder, has signalled their ambitions: “To be a leader, not just in fashion ecommerce, but in new categories including beauty, sport and homeware.”

He also said: “This is a transformational deal for the group, which allows us to capture the fantastic opportunity as ecommerce continues to grow. Our ambition is to create the UK’s largest marketplace.”

His comments signal a move away from being a purely fashion retailer and moving towards life as an online department store. The group plans to repurpose the Debenhams website as a marketplace for third party brands to list and sell their goods, akin to Amazon or the fashion-focused platform Zalando.

Debenhams’ online presence is incredibly lucrative, making £400 million a year, with 300 million visitors annually. This makes it one of the highest performing retail websites in the UK. As well as helping Boohoo to appeal to an older demographic, thanks to the acquisition, they will be able to expand into new markets outlined by its co-founder: beauty, homeware and sports.

Analysts are predicting big things for Boohoo. Andrew Wade, analyst at stockbroking firm Jeffries, commented that Boohoo “bought a lot of asset for £55.”

Asos are in talks to buy Topshop, Topman, Miss Selfridge and HIIT – a brand sold through Burton. Again, if the deal goes through, it’s likely that the brands will become online-only businesses. Dorothy Perkins and Wallis have not been mentioned as being part of the deal that is proposed.

Asos commented on the potential deal, saying: “(the deal) represents a compelling opportunity to acquire strong brands that resonate well with its customer base.”

They included a word of caution, saying there’s “no certainty of a transaction and Asos will keep shareholders updated as appropriate.”

As yet, as we mentioned last week when it looked as if Next were set to buy Arcadia, Evans is the only Arcadia brand to have been acquired, having been bought by City Chic.

Both Arcadia and Debenhams had been struggling for a long time, well before these two deals emerged. These two concurrent stories serve to highlight the vast gulf between the fortunes of specialist online retailers and bricks and mortar businesses reliant on physical stores – forced to close for months throughout the three lockdowns during the pandemic.

Richard Hyman, retail analyst at consultancy firm TPC, believes COVID-19 has accelerated the opposing fortunes of online and bricks and mortar businesses: “Twenty years ago there was no such thing as online retailing. Non-food retail sales online hit £90bn in 2020. Since 2000, the number of physical stores has not gone down and something has got to give.

“It is terrible for the people that work there but there is going to have to be a lot of repurposing as UK retail is oversupplied.”

Boohoo have said that, even after the Debenhams deal, it has £387m in cash reserves to fund future acquisitions.

This means the impact of COVID-19 will stretch on and on for bricks and mortar operations, as businesses try to claw back profits lost from lockdown restrictions, vastly reducing their revenue making opportunities. Meanwhile, online retailers thrived as the lockdown accelerated consumer familiarity with online shopping. Even as the high street stores reopen and vaccines are administered, consumers may be unwilling to expose themselves to the risk of contracting the virus.

Online retailers will bide their time for now, propped up by increased revenues during the pandemic, ready to pull the trigger as brick and mortar retailers hobble on in a post-pandemic environment.

For the latest breaking news on this story and the latest companies to go into  administration sign up now.

No Responses to “Analysis: Boohoo’s Debenhams Deal and Asos-Acardia Talks Could Cause Irreparable Scars to the High Street”