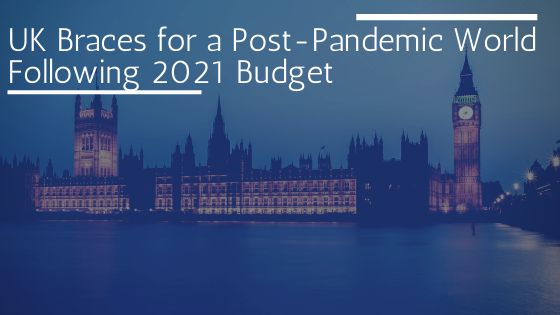 One year after being hastily drawn in to devise a Budget at the last minute, Chancellor of the Exchequer Rishi Sunak returned to the dispatch box on the floor of the House of Commons to deliver a new Budget for a new era entirely.

The COVID-19 pandemic was scarcely factored into the previous Spring Budget, meaning this year’s Spring Budget was bound to represent one of the most unusual Budgets perhaps since the Second World War.

The recession of the past year means there have been winners and losers, as restrictions imposed to protect the health of the population dampened down economic activity. Using our own estimates, a large number of companies entered administration, especially in real estate, construction and retail since the start of the year already.

The Budget is a chance for the government to address the events of the last year, so learn about the state of some of the most attractive sectors for distressed acquisitions in 2021 and what the Budget could mean for them.

It’s no secret that the 2020-21 financial year was one of the hardest in living memory for the high street. As with any recession, a weakening in consumer confidence often causes footfall to drop and consumer spending to dry up. Weak economic prospects and rising joblessness make many of us more reluctant to spend, and to count our pennies instead.

Unusually, this time around, footfall dropped to a far sharper degree than usual, during the COVID-19 downturn, as government-enforced restrictions kept more of us at home. One of the consequences of this was a shift towards higher levels of online consumer spending.

Retailers that have fully embraced the digital revolution of the past few years were well-placed to cater to an audience of stay-at-home shoppers looking for convenient deliveries to their doorstep. In the meantime, those reliant on a brick-and-mortar setup faced unforeseen hardship.

One of the latest retailers to enter administration according to our records was a Surrey-based clothing retailer, with assets worth £7 million.

The likes of Debenhams and Topshop are a more high-profile example of the decline of physical retail brands, resulting in one of the largest administrations of the last 12 months, when Arcadia Group collapsed. Such occurrences can be blink-and-you’ll-miss-it opportunities to scoop up the significant amount of resources left behind, allowing newer retailers with a more dynamic approach to fill the gap left behind, when consumers return to the high streets in the coming months.

The £7 million of assets which were left over from the aforementioned clothing retailer going out of business are just a taster of what is on the line at the moment, and what there is to play for, for buyers ready to reinvent the high street for a post-COVID future.

The 2021 budget saw the announcement that the furlough scheme would be extended until September, while a business rate holiday would remain in effect until June, taking some of the financial pressure off retailers biding their time until they can reopen physical stores again. A restart grant has also been offered, to aid businesses, as part of a phased reopening from April 2021 onwards.

However, business rate relief is to be gradually phased out, with 66 per cent of business rate bills offered to eligible closed businesses from July 2021 onwards, to be capped at £2 million until March 2022. Unless demand recovers strongly enough for some retailers, such relief might simply not prove enough to meet liabilities, prompting a potential wave of administrations by the summer. This could stem specifically from the non-essential sector of retail, so it pays to stay alert to developments in this space around this time.

The transport sector appears to have been less fortunate when it comes to budget provisions, especially with regards to the aviation industry. The Airport Operators Association (AOA) responded to the Spring Budget, sounding the alarm that the Budget had been blind to the reality of an almost total shutdown of international air travel.

AOA Chief Executive Karen Dee explained: “While the extensions of the Job Retention Scheme and airport business rates relief are very welcome, they are not nearly enough, given the scale of COVID-19’s impact. Combined with the long‑haul APD increase, which is a very damaging blow to an industry already on its knees, this is not a Budget for a global Britain.”

In July last year, millions of pounds worth of assets were up for grabs, when we got wind of multiple businesses involved in services activities incidental to air transportation based in Crawley all going into administration at once. In more recent weeks, administrations in transport have been limited to freight, but aviation can be a seasonal sector, so things could heat up once more by the summertime.

A few weeks before this, back in May 2020, we reported about the collapse of Flybe, an airline which had been operating for just over 40 years. Its collapse last year was so extensive that even the future of Southampton Airport was placed in doubt for a brief time. That’s because airlines such as Flybe can often be responsible for the bulk of a single airport’s total air traffic. Loss of one single airline could mean the end of the line for an entire airport, unless they secure a new airline’s business.

When an airline goes under in such a way, a domino effect can be triggered, putting entire airports and all of the businesses that operate within and around them at risk of administration in one fell swoop. The UK’s Civil Aviation Authority publishes easily accessible reports of air traffic on a regular basis from more than 60 UK-based airports.

If you are interested in seeing how to find an in-road into the world of transport when it comes to acquisitions, it would be savvy to keep an eye on which airports are all systems go and which ones are seeing emptier skies. Such data-led moves could inform you of the airlines to focus on, and which ones could be ripe for acquisition.

Counting the cost of COVID-19

The pandemic has punched a multi-billion-pound hole in the government’s finances, resulting in a sizable Budget deficit. In order to reduce this deficit, the government is opting to shift most of the burden onto raising taxes rather than slashing public spending. A hike in corporation tax was signalled by Rishi Sunak during last week’s budget, suspended until April 2023.

This has the potential to offer struggling businesses some breathing space for now, giving them adequate time to rebuild their balance sheets and prepare for leaner times down the road. The assumption for delaying such a move is that the economy is expected to have picked up sufficiently in the preceding two years to justify something of a normalisation of fiscal policy.

At present, the government taxes company profits at a rate of 19 per cent, the lowest rate in Europe. From April 2023, corporation tax will be hiked to 25 per cent. Despite the hike in corporation tax still being some time away, it makes sense to keep an eye out for any businesses in distress, especially in the run-up to this deadline, as we could potentially still see some firms struggling to get their houses in order.

In the midst of issuing large quantities of debt in the form of bonds due to the pandemic, the government also announced something innovative – green sovereign bonds.

These special bonds, the first of their kind in the world, will allow the government to raise finance in order to fund infrastructure spending to decarbonise the British economy. Like the COVID-19 vaccines, this form of green stimulus could be a shot in the arm for the construction sector, provided that there is enough demand for these new bonds.

Over the course of the pandemic, construction was kept afloat, despite being a more labour-intensive sector, thanks to a lifeline package from the government, worth £330 billion.

Despite this stimulus package, at present, we have registered 11 notices of businesses based in the construction sector entering into administration since 1st January 2021. A significant proportion of these businesses were involved in civil engineering, including the construction of roads, bridges, pipelines and other such infrastructure. The sector has a disproportionately higher level of rich pickings compared to other sectors at the present time, and could prove to be a rewarding investment opportunity, especially following the delivery of the 2021 Budget.

By keeping an eye on construction firms related to housebuilding, civil engineering and broader infrastructure projects, people waiting on the sidelines could cash in on a lucrative investment with a well-timed acquisition here. That’s because the green sovereign bonds issued by the government are expected to be worth £15 billion in their initial offering, and construction firms could enjoy a much-needed influx of investment at long last, over the coming years.

For the latest breaking news on this story and the latest companies to go into administration sign up now.