Collapse of Lender Puts Future of Steel Giant in Doubt 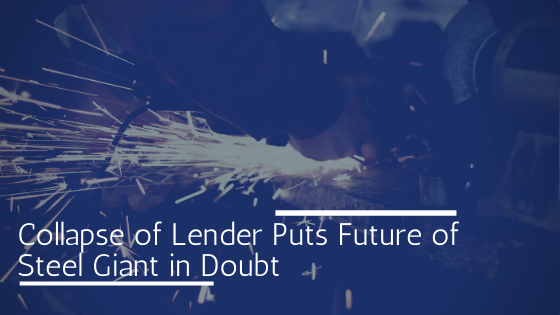 Founded in 1992 by Sanjeev Gupta, Liberty Steel is the UK’s third largest steel manufacturer, for good reason, having survived various routs in the markets over the years. Over the last decade, China has been churning out tonnes of raw materials, resulting in a steel glut which continues to this day. Despite that, Liberty Steel appeared to be on a sound footing.

However, the company has fallen on tough times lately, and may have to face its final curtain call imminently, after one of its largest financial backers, Greensill Capital, filed for administration. See how the worlds of manufacturing and finance are intertwined, and how this collapse could provide a ripe opportunity in 2021.

It’s no secret that steel manufacturers have been having a hard time of it in recent years. A glut of steel products on the global markets has depressed the value of this commodity, making it harder for companies such as Sanjeev Gupta’s Liberty Steel to thrive. Steel is a tough and durable metal, but when there’s too much steel and insufficient demand, the manufacturers can find themselves buckling, fighting a losing battle.

The collapse of Greensill Capital sets 2021 off to a rocky start for the manufacturer. Just a few months ago, Greensill was reportedly on the verge of a floatation on the US stock market, hoping to attain a valuation of $7 billion. Now, the company is selling off its assets, having failed to pay back a $140 million loan to Credit Suisse.

The London-based finance firm served as a lifeline for Liberty Steel, and while the turmoil surrounding its administration may seem unrelated to the steel manufacturer, there’s more to it than meets the eye.

A report was published in the Times, alleging that Mr Gupta and Lex Greensill, the founder of Greensill Capital, had exploited the government’s COVID-19 large business interruption loan scheme (CLBILS), borrowing £400 million, equivalent to eight times the limit on what large businesses were entitled to draw down from the scheme.

The chicken and the egg

There may be something of a chicken-and-egg dynamic at play between Greensill Capital and Liberty Steel. Struggling businesses such as Liberty Steel often seek finance to plug gaps and stave off a collapse, but adverse business conditions can trigger a domino effect in financial markets. By failing to repay loans to its lender, Liberty Steel may have played a role in Greensill Capital’s downfall, and potentially its own demise as a result.

That is because reports suggest financial conditions at Greensill Capital were directly impacted by a wave of defaults by GFG Alliance, the parent company to Liberty Steel, run by Sanjeev Gupta. Mr Gupta is reported to have owed as much as £3 billion to the lender, at the time of its collapse.

Such a complex financial web between manufacturing and finance highlights what can be at stake when such businesses file for administration. Assets worth hundreds of millions of pounds could soon come online for anyone looking to snap them up.