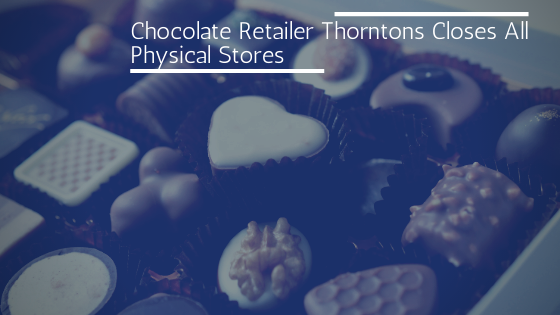 Established in 1911 by Joseph William Thornton and his father, Thorntons has been one of the UK’s largest confectionary-only parent companies, selling high-end chocolate products all year round. The brand tapped into the nation’s sweet tooth, with a wide range of branches across the country, and for a long time, business was booming.

However, the COVID-19 pandemic has claimed another high street victim, as Thorntons announced to its customers that it intends to close all physical stores this year, and switch its focus purely into digital sales through its official website.

A change in tastes

In a letter published on its official website, Thorntons informed the public that, despite its best efforts, the chocolate retailer would be entering into consultations to begin the permanent closure of its entire retail store estate.

The letter claimed, “Changing dynamics of the high street, shifting customer behaviour to online, the ongoing impact of COVID-19 and the numerous lockdown restrictions over the last year – especially during our key trading periods at Easter and Christmas – has meant we have been operating in the most challenging circumstances.”

Thorntons added that while it would be seeking to close all 61 of its physical stores across the UK, it would continue to sell products through its website and alongside key retail trading partners. The retailer noted that: “We have seen a strong growth in Thorntons.co.uk and this will remain a key focus for us.”

There’s always a time for chocolate, certainly according to the spending habits of the average British consumer. According to Money Saving Heroes, the average person in the UK spends £325 on chocolate per year. However, an increasing number of future purchases may have to transition from physical to digital sales.

While Thorntons is far from calling in administrators – the brand enjoys strong franchise partnerships on the high street and with supermarkets – the loss of all its existing physical stores means the high street becomes that bit quieter.

In January 2021, Savills reported that the UK had 142 million square feet of vacant retail space, or 12.6 per cent of total retail units. Without interventions, this figure could surge to 25 per cent of units being vacant by 2030. This opens up the opportunity for significant amounts of floorspace to be acquired and put to good use by the right buyer, as shoppers return to the high streets, when pandemic restrictions are wound down sufficiently.

No Responses to “Chocolate Retailer Thorntons Closes All Physical Stores”