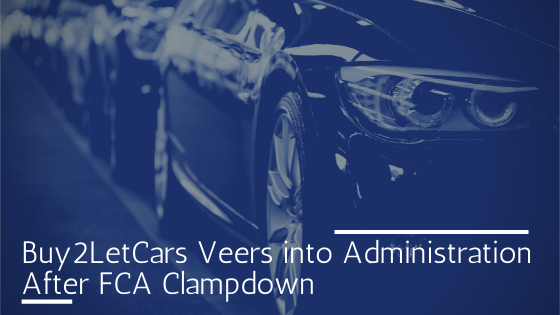 Mere months ago, Buy2LetCars was seemingly at the races, providing a service of offering investment opportunities to wealthy individuals. These investments would finance the purchase of new cars which would be leased to those with poor credit histories through a subsidiary, Wheels4Sure.

The investment model was claimed by the company to yield returns of 7-11 per cent per annum for investors since 2012, provided they lend a minimum of £7,000 over a period of three years. However, the company fell foul of the Financial Conduct Authority (FCA) in February 2021, and has now skidded off the roads and into administration altogether.

The long road to administration

Concerns were raised by the FCA last month, when they placed restrictions on Buy2LetCars’ parent company, Raedex Consortium Limited. These restrictions included banning the company from providing new leases using investor money. The FCA’s official explanation was as follows:

“On 19 February 2021, the FCA imposed a number of restrictions on motor finance provider Raedex Consortium Limited (Raedex), requiring the firm to cease conducting regulated activities because of concerns about its finances.”

These concerns could potentially stem from the fact that Buy2LetCars is not regulated by the FCA. Due to the administration of the business, all investors have effectively become creditors, and this could prove yet another headache. Any investments made to the company could be tricky to reclaim, as creditors would be relying on the leaseholders to continue making payments over time, or the administrator might have to recoup the cars involved in the scheme.

No one left behind the wheel

According to Companies House, Raedex filed accounts suggesting that it had net liabilities worth £10.87 million pounds, while holding tangible assets worth £5.3 million. Much of these tangible assets are likely to be tied up in the cars the company has purchased over the years.

It remains unclear whether these assets can be recouped in such a way in order to generate sufficient funds to pay back the total amount of money invested in total by customers. Many of those with the most to lose may have been tempted to invest, especially after reading Buy2LetCars’ own website boast of a more ambitious 27 per cent return on investment, while advertising free Zoom webinars open to the public.

Review pages for Buy2LetCars on sites such as Trustpilot have since been flooded with a large volume of one-star reviews from angry investors. One left a comment, saying: “My husband and I recently loaned our pension savings to Buy2LetCars and now we are devastated at their sudden administration. I haven’t stopped crying all day.”

Another wrote: “It looks like the wheels have fallen of my £28,000 investment, of which I had been repaid about £8,000 over the past 18 months…I hope the administrator will manage to retrieve something of value from the wreckage of this fiscal car crash…In theory there are four cars in my name, but in practice I will be lucky to get back the equivalent of a couple of hubcaps and an air freshener…I’m certainly not holding my breath!”.

RSM Restructuring is understood to be handling the administration of Raedex, as well as its subsidiaries including Buy2LetCars and Rent 2 Own Cars Limited.

No Responses to “Buy2LetCars Veers into Administration After FCA Clampdown”