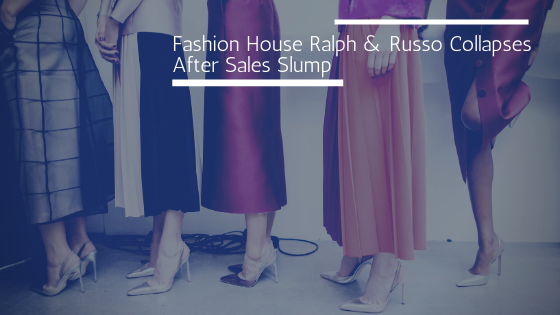 Just four years ago, luxury fashion house Ralph and Russo was producing a designer engagement dress for royalty. This year, amid a COVID-19 slump in sales, the brand is closing up shop entirely and has entered into administration.

Founded by creative director Tamara Ralph and her then-boyfriend Michael Russo in 2010, the fashion brand specialised in high-end couture, shoes, bags and other accessories. High-profile clientele including royal family members simply helped create an image of a fashion house making its way in the world.

Ralph & Russo enjoyed sizable investments over the decade of its operations. In 2014, the brand made a big splash in the global fashion world, becoming the first British fashion house in more than a century to be awarded guest membership into the prestigious Chambre Syndicale de la Haute Couture Fashion.

This Paris-based regulating commission ultimately decides which fashion houses are worthy of being elevated to being considered true haute couture houses, and its 2014 ruling marked a PR coup that seemed to set Ralph & Russo up for greatness.

Publications such as Vogue cite Meghan, Duchess of Sussex wearing a Ralph & Russo engagement dress in 2017 valued at $100,000 as being a pivotal moment which placed the brand firmly in the higher tier of fashion houses. By 2019, Ralph and Russo had received a $50 million investment from La Perla Fashion Investment BV. The move gave La Perla a minority share in the brand.

No longer a high street fit

Despite a glamourous decade in the limelight, Ralph & Russo began to experience profound financial difficulties, especially following the introduction of restrictions during the COVID-19 pandemic. Sales slumped, and as recently as February 2021, there were signs of a financial crisis brewing within the fashion house.

Reports emerged of staff payments being deferred, and according to the company’s financial records, Ralph & Russo was making consistent financial losses which mushroomed from just £1.77 million in the 2015-16 financial year to  £14.83 million by 2018-19.

Despite multi-million pound profits over a number of years, the business had significant annual administrative costs to pay, and a slump in sales in 2020 may have proved to be the financial hit that made prospects for recovery impossible. Ralph & Russo’s collapse leaves behind assets which had an estimated value of over £330,000 in 2018-19, appointing both Begbies Traynor and Quantuma as administrators to investigate “all possible options” for them.