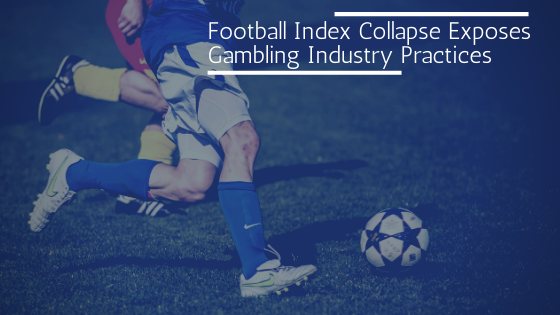 Founded in 2015 by Adam Cole, the Football Index allowed fans of the beautiful game to gamble on the performance of their favourite football players. Imaginary shares would be issued, which could be bought, with the expectation of a gain to be made, depending on how a player would ultimately perform on the field.

However, as we have learnt in March 2021, it was what was happening off the football pitch that was really important, as the Football Index collapsed into administration this month, to the surprise of many.

The gambling industry keeps the coffers flowing based on the fundamental attraction of risk and reward for a growing number of willing participants. Dubbed the ‘stock market of football’, the Football Index appeared offer a sizable reward for fans, who could gamble on the success of a player over a three-year period, both on and off the pitch. Payouts could be offered in the form of dividends, based on the player’s performance.

Traders in this system could also trade their wagers in specific players to generate extra profits, having to pay a small fee to the Football Index itself for the pleasure.

So far, so good, except there are now concerns emerging that regulators took their eyes off the ball at a critical time. Millions of pounds were estimated to have been traded over the years the Football Index was in business, but the golden opportunity unravelled fast in early 2021, when the maximum dividends a user could make per day were slashed from 33p per share to just 6p.

Rot in the gambling industry

The slash in maximum payouts reportedly led to an 82 per cent drop in potential profits for users to expect when using the platform, prompting an angry response from thousands of its users. The share price for the Football Index crashed as investors sold their shares, leaving those left behind with virtually no chance of recouping their losses.

One of the leading issues facing the Football Index was simple – during the pandemic, matches were cancelled and a number of players had fewer opportunities to gain coverage in the press, directly impacting the way users could make money. In addition, users could seemingly make rules up as they went along, leading to distortions between buyer and seller prices. Such moves, in which seller prices were far lower than the original buying prices, made it impossible to generate profits for newer users.

The Gambling Commission (GC) entered the fray recently, revealing an almost year-long investigation into the practices of Football Index started back in May 2020. Concerns were raised as long ago as January 2020, with a report alleging that the Football Index could be a form of pyramid or Ponzi scheme, only able to sustain a growing pile of liabilities in the form of dividends by persuading an ever-increasing number of users to buy up shares. Profits for a minority of investors could only be assured by attracting a growing base of new investors, as the newly-invested money would go straight into helping pay the funds of the lucky few who got in early.

The purchase of each share simply compounded the cost of liabilities for the Index over time, and should the system collapse, the GC was warned, that only a minority would be able to retrieve their money safely, but the majority would lose out. The collapse of the Football Index is seen by many to expose the rot at the heart of the gambling industry, a place increasingly criticised as being under-regulated and allowed to run wild.