UK Exporters Stuck in a Rut in Early 2021 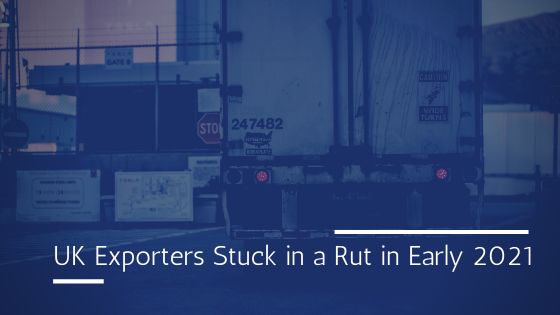 The process of withdrawing from the EU was never going to be easy, but few could have imagined precisely how complicated the UK’s trading relationship with the bloc would become. The transport and freight sector is one of the most exposed parts of the UK economy to Brexit-related issues, and the pandemic has done much to compound this.

Total exports to the EU fell by 40 per cent in January, with shipments of popular products to the EU such as whisky, cheese and chocolate falling by 75 per cent during the month, according to analysis by the Food and Drink Federation (FDF). This alarming drop in exports of goods and services with our largest trading partners is caused by a range of factors, and has the potential to disrupt multiple sectors as a result.

It’s a statistic that will undoubtedly worry the government – the UK has traditionally run a sizable trade deficit worth billions of pounds on an annual basis for a number of years. Successive governments have striven to narrow the gap with little success. Such efforts intend to transform the UK into a major exporter to compete with Germany and Japan, but these ambitions just became even more remote in January.

According to the Houses of Parliament, the UK ran a trade deficit worth £10 billion in 2020 alone, with the EU comprising 42 per cent of total exports during the year.  Whether the UK is in or out of the EU, we can’t remove ourselves from the simple fact that Europe is the leading market to buy our goods and services.

This trade drop-off isn’t just confined to Brexit-related teething problems, however. The COVID-19 pandemic has seen a profound decline in demand for food and drink, due to the closure of bars, restaurants and shops across the EU.

In order to ensure that products make it from A to B in good time, the UK needs a healthy haulage and shipping industry to carry the load across the Channel and the North Sea in shipping containers. There are troubling signs for the transport sector of late, following reports from the Road Haulage Association (RHA) of delays at ports.

The RHA revealed this month that traffic flows were barely managing to reach 90 per cent of pre-Brexit levels, with some shipments arriving from the Continent, only to leave the UK completely empty. These empty trucks all add up to a trade figure firmly in the red, and Administration List has spotted signs of trouble in recent months in the sector, correlating with this trend.

In the first three months of 2021, we’ve spotted two businesses in the transport sector collapsing into administration. The first was based in Manchester, specialising in freight transport by road, leaving assets worth £1.5 million. In addition, the second collapse occurred in Birmingham – a sizable administration of a business which held assets worth £4 million, when it went out of business in mid-February.

Transport and freight are clearly experiencing a profound shake-up, due to the shift in the UK’s complicated trading relationship with the European Union, but amidst the apparent chaos, there are opportunities to be had, provided you keep your eyes on haulage companies which might be on the brink in these post-Brexit COVID-19 times.