CBILS Winds Down After a Year of COVID-19 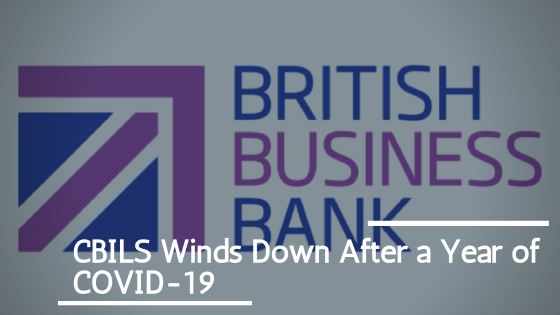 When news started to emerge about a mysterious respiratory illness emanating from China in early 2020, few businesses could have expected it would affect their bottom line and disrupt our way of working, possibly forever. COVID-19 was not only a shock to our health but to our economy as well.

In order to stem the tide of cases reaching the UK, a lockdown was formally announced on 23rd March 2020, a date that will go down in history. Shops were shut, non-essential business was curtailed and more of us began to embrace a working-from-home culture which persists to this day.

However, there was another major event that occurred in March 2020 – the establishment of CBILS, the government’s COVID Business Interruption Loan Scheme. Without it, many businesses would have been hit by the lockdown restrictions and possibly never recovered, damaging the economy.

What follows is the story of CBILS and how it has changed the way we do business in the UK.

CBILS is here to help

The closure of businesses during lockdown came at a pivotal time last year. We might not have realised it, but cases were surging to levels which would place unprecedented pressure on our health service, resulting in stark choices being taken in hospitals all over the country. It was a necessary sacrifice to limit the amount of interactions between households, but had a serious effect on our economy.

The retail sector froze up completely, starved of footfall just as Mother’s Day and Easter were approaching – two of the biggest shopping days in the first half of the year. The shock to the high street is made starkly apparent, when you look at household savings relative to disposable income over the past year. This ratio spiked from a low of 7.7 per cent in late 2019 to a high of 27.4 per cent in mid-2020, suggesting a massive reluctance to spend by consumers, or simply reflecting the truth that consumers had less opportunities to spend, as they were confined to their homes for much of the first half of 2020

Such a consumer spending freeze could have meant it was curtains for a vast swathe of businesses, but fortunately for many, the government had a new scheme waiting in the wings. CBILS was announced by Chancellor of the Exchequer Rishi Sunak, aimed at small to medium-sized businesses, offering access to loans and other finance up to £5 million per business.

The scheme guaranteed at least 80 per cent of finance to the lender, with the government paying fees and interest for the first year. In order to make sure the cash could be supplied to the right people, the government included a number of key criteria:

The criteria listed above were understandable; the government wanted to make sure funds could be made available only to businesses domiciled in the UK, and that they were of a stage of growth were they needed support, or risk entailing higher costs to the tax payer. In addition, the business had to be considered viable (excluding the pandemic shock) to ensure it could expect to receive funds.

Otherwise, the government would simply be setting an unhealthy precedent, supporting unproductive businesses at the expense of more deserving recipients of assistance. Banks, insurers, reinsurers, public sector bodies and state-funded primary and secondary schools were blocked from receiving funds through CBILS.

A taxing time for business

For the last year, CBILS funds have been made available through the British Business Bank, which has access to over 100 UK-based lenders. So far so good, except not all businesses were in the same boat. Back in April 2020, reports emerged that even with CBILS, 20 per cent of SMEs risked collapsing, as there was deemed to be insufficient support from government for businesses. This implied that tens of thousands of small to medium-sized firms were all on the brink, even with state-backed lending being guaranteed.

A month after the launch of CBILS, the government also unveiled the Bounce Back Loan Scheme (BBLS), a smaller-scale financial operation which offered SMEs the ability to borrow between £2,000 and 25 per cent of total turnover. The maximum amount available through the BBLS has been £50,000.

As with CBILS, the BBLS came with a time-limited offer, in which the government would guarantee the loan (at a rate of 100 percent for BBLS) and pay fees and interest for the first year. From 31st March 2021, these costs all get redirected to the business in question. In the case of the BBLS, once the deadline passes, applications are no longer accepted and interest is set at a rate of 2.5 per cent over the year ahead.

As the deadline approaches, concerns are being vocalised yet again that tens of thousands of SMEs could go to the wall when the schemes stop accepting new applications from April 2021 onwards. Rishi Sunak attempted to give CBILS and BBLS recipients some much-needed breathing space last September, when he announced the payment term for both schemes would be extended from five years to a decade.

Despite the Chancellor’s loan repayment extension plan, the i Newspaper reported that banks and lenders have been refusing to accept extensions from businesses using the schemes, as the government simply couldn’t assure lenders that taxpayer money would be able to cover the value of the loans. This creates an opportunity, wait until government support is withdrawn to identify struggling businesses,  because SMEs with limited cashflow will be seeing diminishing options to stay afloat from this moment onwards.

CBILS is by no means a perfect solution to support ailing businesses, nor is CLBILS, the scheme’s larger cousin. CLBILS is aimed at larger businesses, and there are demonstrable examples of abuse by those seeking to take far larger sums of funding through the scheme than they were entitled to. Such behaviour undermines the noble intentions of such support, and risks diverting much needed cash from viable yet struggling businesses during the pandemic.

Under supplier loans, CLBILS can only offer large businesses a maximum of £50 million each, but reports have since emerged that Greensill Capital helped Mr Gupta acquire multiple £50 million loans through his broad business empire. Greensill was eventually found to have violated the rules of the scheme by the British Business Bank, which subsequently removed the warranty.

Greensill Capital has since fallen into administration, while Liberty Steel itself is facing an uncertain future, having been starved of the funds and capital it needs to sustain itself. Not only that, but Brexit and high energy prices are sapping the manufacturer of the cashflow it needs to survive into the next year.

Owing to its sheer size and importance in the steel sector, the Yorkshire Post reported that the government is being urged to nationalise the company altogether to save jobs in the Rotherham area, where the company’s production hub is located. This means a company which benefited from state-subsidised funding could wind up being completely state-owned, placing a greater burden on the taxpayer.

One of the biggest issues associated with schemes such as CBILS over the last year has been the lack of transparency over which businesses were granted funding through it. US-based publication Quartz submitted a Freedom of Information Act (FOIA) request in May 2020, asking for disclosure of precise sums and the names of recipients.

Quartz received none of the information it desired, but was informed that the British Business Bank would eventually provide information about how much emergency funding each lender provided, to support businesses during the pandemic. In the meantime, we’re left to wonder how effective the plan was, which sectors were most in-need and how significant a financial hit businesses suffered at the height of the pandemic.

What we know for sure is that the scheme is likely to wind up and leave a significant number of SMEs in the lurch, with loans to repay on top of interest and other financial entanglements. As the 31st March deadline passes, pay close attention to signs of floundering businesses searching for a much-needed cash injection, as they could be the acquisitions of the year – businesses which would have otherwise been doing just fine, until the pandemic struck.

This offers you a once-in-a-lifetime opportunity to enter into new markets which had seemed strong and stable. According to the latest economic forecasts, the UK is expected to enjoy a strong recovery in the coming years. Too late to save the various struggling SMEs which not even CBILS nor the BBLS could rescue, but just in time for you to snap a business up, and enjoy the benefits of a post-COVID recovery.