Eurostar Risks Reaching the End of the Line 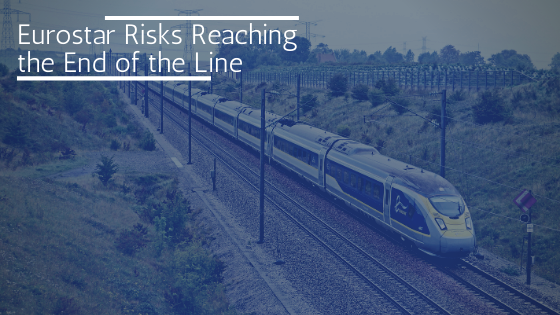 Since 1994, Brits have enjoyed a more convenient way of entering mainland Europe without having to fly or catch a ferry across the English Channel. Eurostar offered a new way – going underneath the channel entirely by high-speed train.

In as little as two hours and 16 minutes, you can be transported from St Pancras International to Gare du Nord, on a service capable of transporting a maximum of 900 people on each journey. However, in the era of COVID-19 restrictions, passenger numbers are down and the business risks going off the rails altogether.

Running out of track

Operated by the company Eurostar International Limited (EIL), the bulk of Eurostar (55 per cent) is owned by France’s state-owned rail network, SNCF. Investment firms enjoy a 40 per cent share, while the remaining five per cent is owned by the National Railway Company of Belgium.

After more than a quarter of a century of operation, the service is under threat due to limitations imposed on it by COVID-19. Reports have emerged that passenger volumes have dropped by 95 per cent since COVID-19 reached Europe, as travellers cut down on international travel during the last year. Eurostar’s revenues fell off the edge of a cliff as a result.

Eurostar went from earning £1 billion in 2019 to just £180 million in 2020, forcing it to borrow millions more to stay afloat. In short, the business is requiring a form of financial life support in order to sustain itself, or risk going off the rails entirely.

The debate about how to rescue Eurostar is fraught with complications. The UK Government is understood to be reluctant to step in and provide financial support, after the UK Transport Secretary was quoted as saying Eurostar was “not ours to rescue.”

This move might be influenced by the fact that the UK Government sold off its 40 per cent stake in Eurostar back in 2015 for £757 million in order to help reduce the UK’s own government deficit during the austerity drive of the 2010s.

Without adequate financial support, Eurostar could collapse within a matter of weeks. The situation has become so serious that pension fund Equitix joined calls for a bailout to be implemented quickly, while the UK Government is being reported as potentially being in a position to eye up regaining some equity stake in Eurostar, in exchange for some form of bailout.

In the meantime, this multi-million-pound business remains firmly frozen in place, waiting for restrictions to lift, and financial aid to arrive in order provide Brits and mainland Europeans with a rail service to enable them to cross to and fro in the years to come.

No Responses to “Eurostar Risks Reaching the End of the Line”