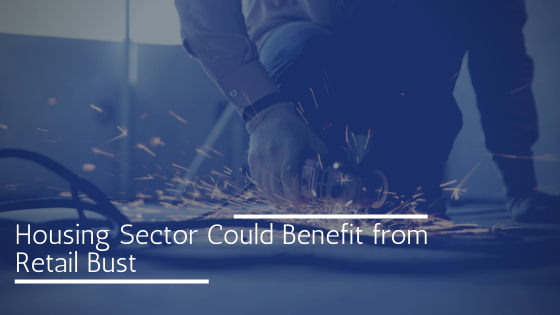 As with many things in life, the market giveth and the market taketh away. There are estimated to be 18,000 retail spaces listed as vacant, according to the Local Data Company at the time of writing. The likes of Thorntons and Jessops have recently been added to the list of high street retailers who exited the high street entirely in recent weeks.

The numbers may sound downbeat, but the UK economy is dynamic, and there’s always an opportunity lurking around every corner. Every stumble from one sector can pose a golden buying opportunity for another. For example, in this case, these thousands of empty retail spaces could help stimulate the housing market over the coming months and years.

Announced by the Ministry for Housing, Communities & Local Government (MHCLG), government minister Robert Jenrick revealed that new planning laws have entered into force. These laws will allow vacant commercial properties to be converted into housing, as part of a government-led high street revival plan.

The government considers the sweeping new laws to be capable of breathing new life into the high street, removing what many consider eyesores, while making the most of idle brownfield sites. The package also included mention of rules allowing for larger extensions to be granted to extant public buildings, including schools, colleges, universities and hospitals.

With retailers closing physical stores in large numbers last year, there’s one thing for sure – there’s plenty of unused commercial space going around. It offers a blank slate for investors, who were quick enough to realise the potential for these plots of land, just as developers get the green light to convert them into housing stock.

The new laws accomplish two goals in one fell swoop: housing development being granted on previously commercial property serves as a form of stimulus to the construction sector, which has been more resilient than most sectors during the pandemic. Anyone turning around a construction business in need of a new direction can pour their resources into this new arena of residential property creation.

The UK’s population is expected to reach 70 million people in 2031, and there is already a chronic undersupply of housing to meet the existing needs of the people. As the population continues to rise, construction needs to pick up the pace, to maintain strong supply to meet this need in the coming years.

In addition, the creation of new homes has the longer-term effect of stimulating the surrounding high streets, allowing more people to occupy the space and spend their cash down the road. Potential footfall in surrounding areas could be greatly increased as a result. While this construction boom might come too late to save those retailers who closed their doors during the pandemic, sticking with retail might prove lucrative, especially if you target distressed businesses which are close to these new residential building hotspots.

Two things are for sure: housing is a basic necessity, especially with a rising UK population, and the UK is also poised to experience a bounce-back in consumer spending after the pandemic subsides. Both factors make construction and retail potential strong performers in the coming years.

No Responses to “Housing Sector Could Benefit from Retail Bust”