Peacocks Retail Chain Rises from the Ashes of Administration 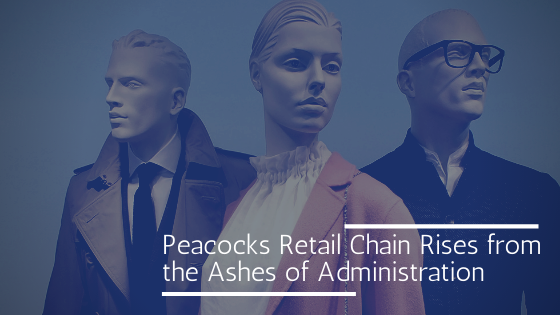 For every business which falls into administration, never to be seen again, miracles can happen and others can seize victory from the jaws of defeat. Peacocks, a Welsh fast-fashion retailer, looked set to disappear from UK high streets for good.

It was reported to owe unsecured creditors (including landlords and suppliers) £70.16 million, with little to help pay down this debt or return back to being a fully-functioning brand.

However, a senior executive from Edinburgh Woollen Mill Group (EWM), Steve Simpson has bought the brand out of administration, with the backing of an international consortium. The deal rescues 200 stores, closing a difficult chapter for the brand. In 2020, the pandemic resulted in Peacocks having to close 200 shops across the country.

Peacocks offers a glimmer of hope for the high street, especially in the fashion sector. Peacocks had previously faced administration back in 2012, feeling the pinch as consumers tightened belts following the financial crisis of 2008.

EWM Group rescued Peacocks from administration nine years ago, and for a few years, tills were ringing as consumers rediscovered their desire to splash the cash on clothing with a minimal price tag. However, the pandemic hit the retailers’ profits, and EWM Group as a whole fell into administration itself in November 2020.

Peacocks managed to outlive the downfall of EWM, but was perceived to suffer from the same issue that afflicted Arcadia and Debenhams – a failure to modernise and embrace digital sales through a strong online presence. Closure of stores to preserve the business as a whole wasn’t enough to keep Peacocks from going underwater, owing to this failure to hit the right spot with savvy online shoppers.

Peacocks’ largest creditor was reported to be Philip Day, owner of EWM Group. However, Mr Day was believed to have reached a point where he owed money to Peacocks, in a change of fortunes. Fortunately, a deal has since been struck by administrators from FRP and Mr Day, which will allow him to sign a deferred loan agreement with a consortium of investors.

Most of these investors are believed to be domiciled in Dubai, where Mr Day himself is currently living, and the deal will ensure that Mr Day can retrieve his money from the retailer over time. However, the likes of landlords, suppliers and the taxman could lose out as a result, deemed to be unsecured creditors in this case.

The deal ends Mr Day’s day-to-day work in control of the business, and marks a blow to Sports Direct owner Mike Ashley’s ambitions to bag the brand for himself, as reports emerged that administrators had failed to come to an agreement with him.

Peacocks’ sudden and dramatic rescue out of administration goes to show that brands can often return to fight another day, with well-timed interventions during periods of vulnerability.