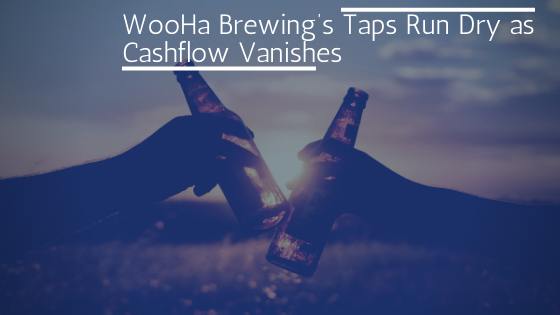 The craft beer industry’s cup was seemingly overflowing with profits in the 2010s, with the number of microbreweries almost doubling from 1,000 active sites in 2012 to 1,897 in 2019. However, as we have seen with pubs and restaurants, the pandemic has impacted the hospitality sector, with millions of pints gone untasted.

As beer taps have run dry due to the pandemic, Brexit has also done much to put pressure on the likes of WooHa Brewing, a Scottish craft beer manufacturer based in Kinloss, Morayshire which just went into administration. This brings six years of operations to a close, leaving gaps in a dynamic new sector of the market.

WooHa Brewing Company was created in 2015 by businesswoman Heather McDonald, and managed to appeal to craft beer lovers domestically and as far afield as Russia, China and Finland, producing distinctive ranges of beers through a number of brands.

These brands included Roch N’ Roll, Hop Stampede and Jenny from the Boch, while WooHa kept customers’ thirsts quenched with seasonal releases of new beers. The business grew so large that it managed to secure partnerships with the likes of Wetherspoons and Ocado. Not only this, but WooHa was developing a thriving direct-to-consumer approach to sales, with attractive offers to customers through its website.

However, the mass closure of hospitality sectors domestically and abroad hit WooHa’s revenues hard, resulting in a drop-off of exports and a dramatically reduced income, as consumers in Europe and Asia tightened their belts over lockdown.

The administration of WooHa puts a custom-built 16,000sq foot facility in Kinross up for grabs, and recent financial history suggested the company was in rude health to sustain expansion into new markets, having raised £2.3 million from private investors since its inception.

Brexit proved to be bugbear

The pandemic wasn’t the only issue affecting WooHa over the course of the past year as Brexit has also disrupted WooHa’s operations. In a message to the public, joint administrator FRP claimed Brexit bureaucracy was one of the prime factors resulting in lasting damage to WooHa’s viability as a business.

The brand was increasingly dependent on exports to generate sufficient revenues, but as we have seen with initial data from the start of the year, exports from the UK to Europe fell sharply in January, by as much as 40 per cent.

Unless issues at ports are resolved and the pandemic lifts sufficiently overseas to allow consumer confidence to return, export-oriented businesses such as WooHa could continue to prove vulnerable for the time being. What becomes increasingly clear this year is that seemingly prosperous businesses can have a sharp reversal in fortunes in a matter of months.

Even so, many of the current issues facing exporters could prove transitory, and a well-timed acquisition could allow you to benefit from a post-lockdown and post-Brexit uptick, when overseas beer enthusiasts are in a position to splash out on craft beer products again soon.