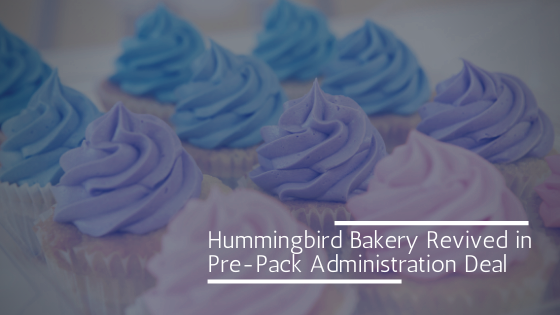 Offering Londoners a slice of authentic American confections including red velvet, rainbow cakes and bespoke cupcake gift boxes since 2004, the Hummingbird Bakery had a recipe for success. Anyone with a sweet tooth used to pop into any one of the brand’s six branches, but lockdown left a sour taste in customers’ mouths.

The Hummingbird Bakery looked set to disappear from the high street for good not too long ago, but just two months ago, it was rescued from administration through a pre-pack deal. Now, the brand can look forward to baking up a storm, so long as shoppers can return in their droves as restrictions ease in the capital.

Icing on the cake

Founded by Tarek Malouf in 2004 with a central store in Notting Hill, the Hummingbird Bakery steadily became a firm favourite, as a go-to place for high-end cakes and cupcakes. However, as with many names on the UK high street, lockdown took its toll on the business, prompting doors to close and hitting revenues hard.

Before the pandemic, things were looking rosy for the Hummingbird Bakery, which was making healthy gross profits of £5.16 million in 2019. Despite high administrative costs, the business was seemingly in a position to continue baking for the foreseeable.

Thanks to colourful products including its distinctive rainbow cakes, the Hummingbird Bakery has enjoyed strong brand recognition, especially on Instagram, where it boasts a following of over 127,000 people. Such brands are well-served by social media platforms such as Instagram, where they can tempt a growing number of customers through a mostly visual medium.

Baking up a pre-pack deal

As mentioned, the Hummingbird Bakery was fortunate to be bought out of administration in a pre-pack deal. This means the company entered into a formal insolvency proceeding, selling either the entirety or just a slice of its assets to a buyer which had been agreed upon prior to the appointment of an administrator.

In this case, the Hummingbird Bakery’s pre-pack deal was baked up to allow Acropolis Capital, a private family investment firm, to buy it up just in time for the business to honour thousands of orders by eager customers on Valentine’s Day this year.

Even despite lockdown and falling into administration, the Hummingbird Bakery is yet another sign of a much-loved brand which was considered viable for rescue and now could be allowed to thrive once more. It served an investment opportunity which might not have happened, had it not been for the pandemic.

As part of the deal, the chain expects to shed three of its outlets, based in Soho, Islington and Richmond, while retaining its Notting Hill hub, along with branches in South Kensington and Spitalfields. The Hummingbird Bakery gives investors a useful example of how a powerful yet small brand with a thriving social media presence doesn’t have to be allowed to vanish without a trace.

All it takes is the right pre-pack deal with a buyer with an eye for the marketplace.

No Responses to “Hummingbird Bakery Revived in Pre-Pack Administration Deal”