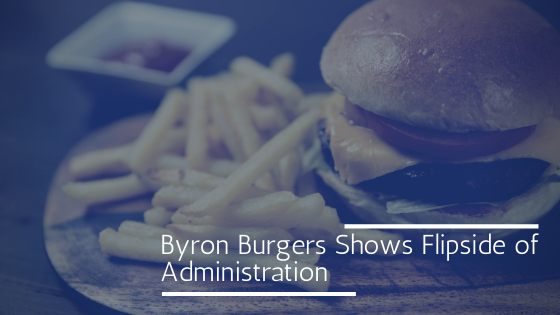 In the aftermath of the financial crisis of 2008, the cost of borrowing was cheap thanks to the Bank of England keeping interest rates low. Easy access to credit through this trickle-down of low rates helped fuel a boom of restaurant chains on the high street in the last decade.

The pandemic exposed cracks in this model, however, as no amount of cheap credit could keep them from going bust, as they were forced to turn customers away for health and safety. The likes of Byron Burgers fell into administration last summer, only to be brought back to life through a pre-pack deal. See how this burger chain has seen the flipside of administration over the pandemic.

The cost of the pandemic

With sleek tile-walled restaurants and a recognisable brand on numerous high streets, Byron Burgers was one of the big success stories of the 2010s in the UK, having been founded in 2007. Diners could enjoy a burger, fries and milkshake on-site or via takeaway, and for many years, Byron appeared to be sizzling away nicely.

However, expansion over a short period of time came at a cost to the brand, exposing it to vulnerabilities which would be the catalyst for tumbling it into administration during the pandemic. At its height, Byron Burgers operated out of 51 chains, but by 2020, the cost of maintaining these venues was unsustainable.

Byron Burgers was facing an uncertain future, with the chain ultimately placed into administration last summer, in the hopes of a swift pre-pack deal for any buyer willing to snap it up. The move ultimately paid off, with investment firm Calveton UK Limited buying the brand and its assets.

One of the consequences of pre-pack deals such as those agreed during the administration of Byron Burgers is that structural changes to a business may be required to make it more streamlined and financially viable in the future. In the case of Byron, it lost over half of the 51 chains, and it looks set to return with a more responsible way of operating.

Casual dining chains are not often known for offering delivery services, or at least this was the culture before the COVID-19 pandemic. As well as running a tighter ship with fewer chains, Byron Burgers could return from administration by branching into more of a focus on delivery sales to online customers.

Pre-pack deals can come unexpected to many, and it takes an eagle-eyed investor to spot juggernauts like Byron Burgers dropping out of the sky. If you have the appetite, you could get the next Byron Burgers falling into your lap, giving you a brand with all it needs to thrive as lockdown restrictions lift.

No Responses to “Byron Burgers Shows Flipside of Administration”