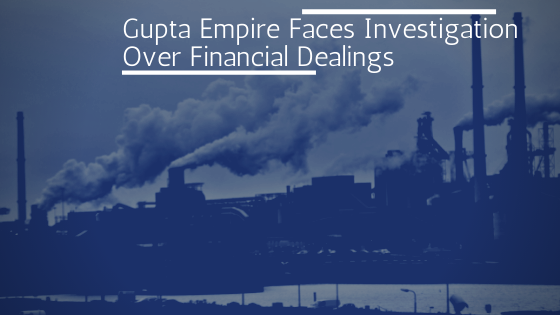 The Greensill scandal deepens, as the Serious Fraud Office (SFO) has announced the launch of an investigation into the financial dealings between Greensill Capital and Gupta Family Group (GFG), the steel empire which belongs to Sanjeev Gupta. Mr Gupta is the founder of Liberty Steel, one of the UK’s largest steel manufacturers, a business now teetering on the brink of collapse altogether.

It’s a story which continues to shine a light on the vulnerabilities of the UK’s manufacturing industry, and the fight to protect business interests as economic trends change the way the UK does business post-pandemic and post-Brexit.

The SFO is the UK’s official anti-corruption agency, and its involvement in the Greensill saga is sending shockwaves through Liberty Steel and Sanjeev Gupta’s broader business empire. That’s because the agency suspects fraud, fraudulent trading and money laundering related to the financing of GFG, including arrangements made with Greensill Capital.

As we have previously reported, Greensill was a major financial backer to Liberty Steel, but collapsed in March, as it alleged that Greensill helped Mr Gupta withdrawn excessive amounts of government-sourced financial assistance through the Coronavirus Large Business Interruption Loan Scheme (CLBILS).

The Times reported in mid-March 2021 that Mr Gupta and financier Lex Greensill had exploited CLBILS, allowing Mr Gupta to take out a series of loans worth £400 million in total – eight times the amount he was actually entitled to. The SFO probe puts the spotlight on Mr Gupta, and comes just as GFG reportedly secured a refinancing deal.

A web of intrigue

The Greensill scandal is something of a complex web, weaving political figures into a financial story with one of the UK’s leading steel manufacturers at its heart. Former Prime Minister David Cameron was asked to testify before MPs on 13th May 2021, explaining his role as a lobbyist for Greensill Capital at the height of the pandemic.

Texts purportedly sent by Mr Cameron to various government ministers have been leaked in the press, revealing his attempts to requesting assistance in helping Greensill Capital. The leaked texts appear to coincide with Greensill Capital unsuccessfully attempting to be granted access to a Covid Corporate Financing Facility (CCFF) emergency loan scheme in April 2020.

One of the takeaways from the scandal is a question about the extent to which the political class uses its privileges and connections to lobby serving government ministers to help businesses in distress. As headlines focus on the ins and outs of Mr Cameron’s dealings with Greensill Capital, the GFG is in a race against time to rescue itself from collapse – especially as Wyelands Bank, part of Mr Gupta’s business empire, faces a seemingly inevitable slide into liquidation, following Mr Gupta’s decision not to inject fresh funds into it.

GFG recorded revenues of $20 billion in 2020, but the fate of its largest subsidiary, Liberty Steel, may yet still hang in the balance, pending the SFO’s investigation.

No Responses to “Gupta Empire Faces Investigation Over Financial Dealings”