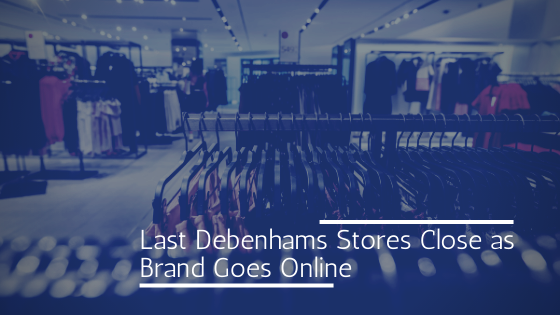 It’s not often that a business with a history dating back to the 18th century collapses, but Debenhams was one such business in the last week. Having opened its doors for the first time, as a single London-based store in 1778, Debenhams grew to become one of the UK’s leading retailers on the high street.

At its height, it operated out of 178 stores, specialising in clothes, household furnishing and furniture. However, the age of physical Debenhams stores is no more, as the brand’s liquidation and revival as a brand by BooHoo means it has ditched all physical stores altogether, becoming an online-only brand.

Closing the doors on Debenhams

The fall of Debenhams as a presence on the high street is sending shockwaves across the retail sector this month, closing a 243-year long era. Since the turn of the millennium, Debenhams faced no fewer than two administrations, in 2019 and 2020, having posted a pre-tax loss of £491 million during preliminary results in 2018.

The collapse of Arcadia Group in late 2020 was a major shock to the retailer, as Arcadia was its main concession operator. As a result of this collapse, talks with JD Sports also collapsed, seemingly snuffing out hopes for a rescue before Christmas. With these talks ending abruptly, Debenhams had little choice but face liquidation.

The new year brought a breath of fresh air for Debenhams, as rival retailer BooHoo, specialising in online fashion, bought the brand and its website for £55 million. The deal did not have provisions for retaining any physical stores, meaning that the brand would return as Debenhams Online Limited, an online-only brand which could potentially market a new range of products for a digital audience of shoppers.

Debenhams has passed through collapse and liquidation, but now faces revival as a digital-only retailer, showing how the high street continues to atrophy in the current business environment while the online space claims a new recruit. When the BooHoo deal went through, Debenhams shed its 118 remaining stores, with the last closing in May 2021.

In its high street heyday, Debenhams faltered for failing to embrace the digital revolution in retail, but the strength of its brand name gives it the chance a second chance under BooHoo. Their new owner could teach it a thing or two about how to be more responsive and dynamic, potentially with more of a focus on fashion and clothing, something BooHoo excels at.

2021 has been a landmark year for large names in retail to go under. The next one could be yours for the taking, but you need to understand the realities for businesses in distress on the high street. While the pandemic has impacted footfall, the shift online has simply undergone an accelerated shift which would have occurred anyway, so hard-hitting retail brands on the future may need less investment in physical, with more resources based around this digital space.