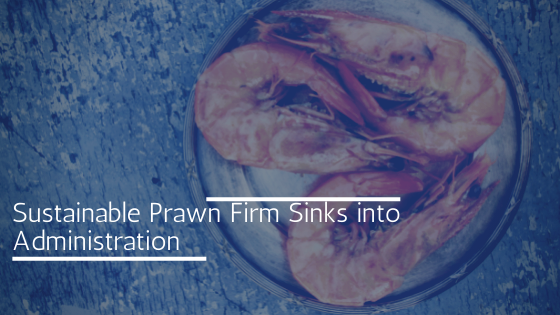 When it comes to prawn farming, few firms could boast like Great British Prawns. Dubbed a pioneer in its field, this business claimed to be the producer of the world’s first sustainable catch of land-based clean-water prawns.

However, like the king prawns they reared, the business found itself getting that sinking feeling, as the pandemic struck.

Founded in Balfron, Stirlingshire in 2019, Great British Prawns used specialist aquaculture technology combined with sustainable power in order to help rear a farm of warm water king prawns. This was a painstaking process, yet an innovative way to challenge the fishing sector status quo.

The business claimed its approach was in contrast to the practice of exporting frozen prawns from Asia and Central America, which it deemed less sustainable, owing to the large number of air miles involved and the energy intensive freezing required to keep the prawns fresh.

So far, so good, at least on the surface. However, when you factor in the unprecedented drop in demand for prawns and other food products due to the pandemic, plus an outbreak of IHHHNV, a virus which contaminated the firm’s first batch of juvenile prawns, you have a recipe for financial difficulties. Such shocks to Great British Prawns proved too great to overcome, and the business has since collapsed into administration.

Fresh stock up for grabs

Great British Prawns was impacted by two major shocks: the biological threat posed by IHHHNV, hitting its ability to rear a sizable stock of prawns to meet demand during the pre-pandemic phase, as well as a financial hit posed by weak demand from hospitality markets as a result of the pandemic.

Tragically for the business, the two prime causes of its collapse both seem to stem from an infectious disease caused by a virus, going to show how the greatest risks to business aren’t necessarily financial, but can be biological in nature as well. As the firm intended to thrive by rearing live prawns, its very survival depended greatly on maintaining the health of its number-one product.

Having only gotten off the ground in 2019, the business stumbled at close to the first hurdle, and could have thrived, had it not been for these twin disasters, going to show how even those with the greatest promise of excelling in their business fields can flounder and seemingly sink without a trace.

The business operated out of a brand new 1,500 square-metre farm, with a 300-tonne water tank capable of housing up to a million fresh prawns, posing an attractive investment opportunity for anyone eyeing up their own foray into the field of sustainable prawn farming in the UK, looking to pick up where Great British Prawns left off.

No Responses to “Sustainable Prawn Firm Sinks into Administration”