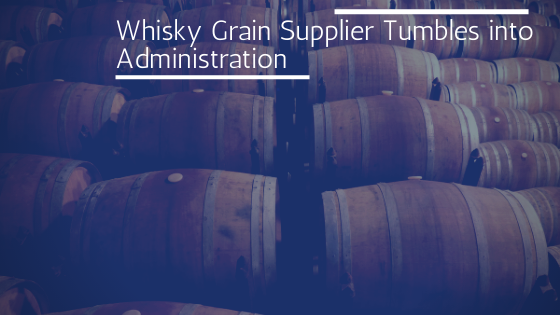 At its pre-pandemic height, Scotch whisky accounted for 21 per cent of the UK’s total food and drink exports. This high-alcohol beverage is derived from fermented grain mash, from crops such as barley, corn, rye or wheat. To give each batch its unique strong taste, whisky is aged in a wooden cask, giving the resulting product an alcohol content of 40 per cent, one of the strongest of any regulated spirit.

Alexander Inglis & Son was one of the UK’s largest suppliers of grains and cereals used in the whisky and distilling industries, until it fell into administration. Learn about the factors which brewed up trouble for this business, and what it suggests about similar businesses in distress.

Based in Tranent, Scotland, Alexander Inglis & Sons had been operating multiple grain stores since its creation in 1950. Scotland is one of the prime exporters of whisky, with Scotch whiskey alone making up 75 per cent of Scottish food and drink exports in 2019.

Unfortunately for Alexander Inglis & Sons, 2020 brought one of the worst harvests for its grains and cereals, limiting the amount of produce it could sell to distilleries. Not only that, but demand for its goods fell sharply during the pandemic. We saw WooHa Brewery, another Scottish business experience hardship, when exports for its products fell due to a contraction in demand over lockdown.

Despite rosy financial statements prior to the pandemic, a collapse in demand and unexpectedly poor harvests in 2020 proved to be the deciding factors prompting Alexander Inglis & Sons to collapse. Tom MacLennan and Chad Griffin, partners at business advisors FRP, have been appointed as joint administrators.

Alexander Inglis & Sons leaves behind a series of well-maintained storage facilities reportedly placed in ideal locations for interested parties wishing to capitalise on the infrastructure they used. Assets for the business were estimated to be worth £30.69 million, reflecting the sizable amount of clout it had at its pre-pandemic height.

While the pandemic has seen many such businesses close their doors for good, there is every possibility that demand will return strongly in the coming years, especially for unique products such as Scotch whisky. A well-placed acquisition during the current climate could be just what’s needed for a new grain and cereals merchant to arise, ready to serve the large number of Scottish distilleries, as they try to satiate the high demand for their popular whisky products.

No Responses to “Whisky Grain Supplier Tumbles into Administration”