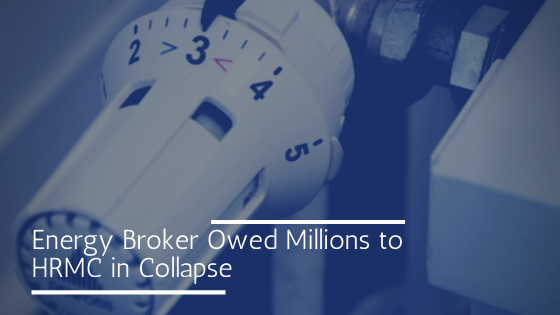 Utility Alliance, a Hartlepool-based energy broker, collapsed into administration earlier this year, owing money to 251 creditors, to the tune of £4.2 million. A handful of creditors were owed as much as several hundred thousand pounds in certain cases, reflecting the scale of Utility Alliance’s financial difficulties over the years.

An administrator report issued by FRP revealed that the business collapsed owing HRMC £2.85 million, as its single largest creditor of all.

In ordinary times, energy brokers are putting their time and energy into helping customers find the best deals with energy producers. However, the pandemic has hit this primarily office-based sector hard. Utility Alliance had three offices based in Hartlepool, Sheffield and Newcastle, and like many over lockdown, it had no choice but to close the doors to its offices, despite still having office space rent to pay.

Revenues were hit hard over the pandemic, in spite of record numbers of Brits spending more time in their own homes during lockdown, going to show how no sector can rest easy, during this time of unprecedented change. Utility Alliance went from being one of the UK’s Top 100 Companies to Work For in 2019 and 2020 to vanishing altogether, reflecting how the economy remains in great flux.

Part of Utility Alliance’s revenue stemmed from selling energy meters, and sales volume had grown greatly between 2017 and 2019, according to accounts filed with Companies House. For continuing operations in the year up to 30th June 2019, the business had made pre-tax profits of £4.27 million, while its balance sheet had increased by ten times between June 2018 and June 2019. During this later period, Utility Alliance held tangible assets worth over £400,000, suggesting the scale of useful assets you would have found in a thriving business before the pandemic.

While Utility Alliance was unable to keep its finances in order during the pandemic or stay afloat, there are great opportunities for other energy brokers or those interested in acquiring the resources to start out in any part of the energy sector, or even the broader services sector as a whole.

A growing number of households are keeping an eye on their energy usage through having smart metres installed. The UK is increasingly shifting away from hydrocarbons, helping it transition its economy towards net zero carbon emissions, and energy companies will face growing calls, especially as the population continues to grow, to provide services to help an increasing number of households decarbonise quickly.

It’s an exciting time to invest in these parts of the energy services sector, but close attention must be paid to the rapidly-changing appetite which consumers have come to expect from energy brokers, utility companies and energy providers over time.

No Responses to “Energy Broker Owed Millions to HRMC in Collapse”