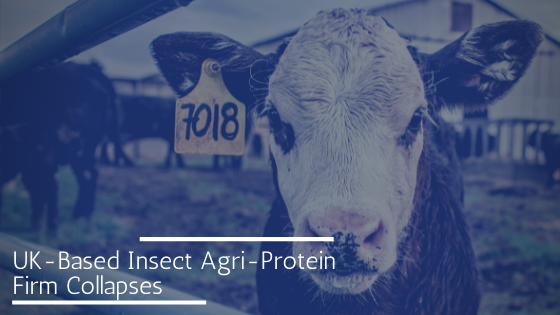 It all started in South Africa in 2008, when AgriProtein was created as a means to revolutionise the production of more sustainable sources of high-protein animal feed. AgriProtein took black soldier fly larvae, fed them on organic waste and reared them to sell as feed protein for livestock.

The brand moved to the UK in the 2010s, becoming AgriProtein Holdings, before becoming the Insect Technology Group Holdings Limited (ITG), but this business has now collapsed into administration.

Grub’s up for ITG

A quick glance of ITG’s accounts filed at Companies House lends some clues to the possible causes of the ultimate collapse of the business into administration in 2021. Based on accounts for 2018, ITG was posting a post-tax loss of over £11,000, with records for 2017 unavailable due to being unaudited.

ITG was reportedly sitting on a vast amount of assets, with its 2018 accounts revealing net current assets worth over £40 million. It made headlines as recently as October 2020, when it was announced that ITG was receiving funding from UK Research & Innovation (UKRI), a UK-based national funding agency which provides the means for investing in research and science.

This UK Government-funded consortium had just received an allocation of £10 million to fund new research, but despite involvement with UKRI, ITG was still not able to stave off an ultimately inevitable collapse into administration in early 2021.

Brian Johnson and Peter Kubik of UHY Hacker Young were revealed to be joint administrators of ITG, offering an attractive opportunity for buyers to check out the company’s business and assets. This includes what are considered pioneering and high-value intellectual property, property leases based in the UK, Belgium and India, as well as the assets themselves: plant and equipment, plus office furniture and equipment.

ITG is a rare opportunity for investors to pick a business in distress which can really make a splash in the field of technology and agri-science. This business may have proved unable to remain afloat amid stormy business seas of late, but its ability to receive funding from UKRI before its administration reflects the tremendous support offered by the government in this field.

If you play your cards right and pick an opportunity such as ITG or something similar, you too may find yourself at the forefront of new agri-scientific discoveries and innovations which change the way business is done.