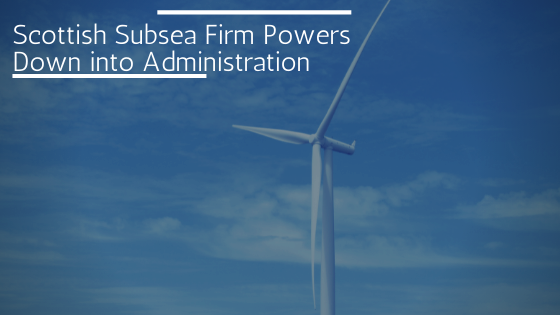 Off the Scottish coast, wind turbines are doing their bit to make Scotland one of the greenest nations in the UK. In 2019, Scotland was revealed to be generating so much energy from wind that it could power the country twice over, thanks to the 9.8-million-megawatt hours of electricity generated in just one six-month period that year.

However, despite a stellar renewables performance, vulnerabilities in the energy sector remain, especially after N-Sea Offshore Limited, an Aberdeen-based subsea firm tumbled into administration.

Powering down for good

N-Sea Offshore Limited was a subsidiary of the broader N-Sea Group with headquarters based in the Netherlands which had been established in 2014. However, the business has ceased trading with immediate effect according to fresh reports, with a variety of reasons cited for its sudden administration.

In the latest filing of accounts, director JD James wrote that 2020 had been dominated by the COVID-19 pandemic, adding that: “We will focus on cash preservation.”

Downturn in the North Sea

FRP were called in to handle the administration of N-Sea Offshore Limited, claiming that attempts had been made by directors to ensure the survival of the business, but a downturn in activity in the North Sea plus “unsustainable” cash problems proved too vast to surmount.

According to the BBC, Chad Griffin from FRP was quoted as saying: “We will now wind down the business and will be looking to sell the extensive assets as soon as possible.”

The Companies House accounts for 2019 suggested N-Sea Offshore Limited held tangible assets worth £2.15 million in that year, with net assets totalling over £571,000. While N-Sea Offshore Limited was unable to overcome its financial difficulties, the Scottish renewable energy market is brimming with potential.

Production of wind power has boosted Scottish electricity exports, which were worth an estimated wholesale market value of £760 million in 2020. Perhaps you could be the next big thing in this booming sector, as the UK continues to decarbonise and shift towards greener, more economically productive energy solutions.

No Responses to “Scottish Subsea Firm Powers Down into Administration”