Brexit and COVID-19: The Impact on UK Trade 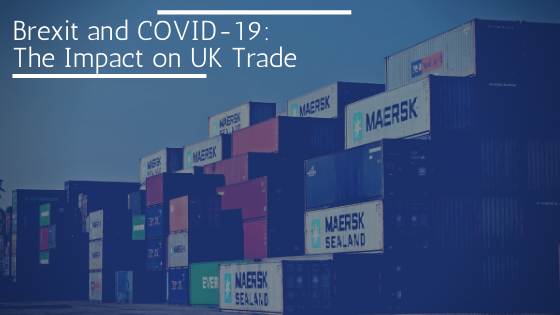 For centuries, Britain has been a country with great interest in securing its trade position across the world. It is defined as much by its knack for trade as it is as the birthplace of Parliamentary democracy.

Since the post-war period, the UK has run a trade deficit. Over a period of 76 years to 2021, the UK has only achieved a trade surplus in 18. Even so, the UK remains a source of many popular exports ranging from products as diverse as financial services to food and drinks. Europe is one of the UK’s prime trading partners, and despite leaving the EU, this still remains the case. However, the UK’s changing relationship with the EU, as well as the COVID-19 pandemic, have impacted its trading relationship.

These twin shocks to the UK economy pose phenomenal opportunities and risks, especially when it comes to trade. So, how can distressed business buyers capitalise on this situation? The real question is, how transitory are these shocks, and which parts of the economy stand to gain at the expense of those businesses which are less fortunate?

Brexit bureaucracy on the rise

In itself, the COVID-19 demand shock inflicted enough damage on the economy to go into the record books. Even so, the pandemic and the lockdown that followed only paint one part of the picture of the UK’s recent economic history. For half a decade, the economy has been digesting each new development in the UK’s trading relationship with Europe, following the ‘Leave’ result in the EU referendum back in June 2016.

While not legally binding, the referendum reflected the clear will of the people which the government of the day was dedicated to delivering. But the actual delivery was always going to be fraught with complications.

The UK had to disentangle itself from an arrangement almost half a century in the making in the space of just four years, resulting in a rocky period between 2016-20 of business uncertainty, multiple Brexit deadlines and frequent stockpiling incidents.

Stockpiling is a natural arrangement for businesses to pursue, especially if they perceive supply squeezes. On a number of occasions, fears of a ‘no-deal Brexit’ loomed, with sudden cliff-edge dates in the calendars, as retailers and the transport sector scrambled to supply goods, only to stop suddenly, when the deadline passed without the expected supply disruption afterall.

This stop and go approach in the economy persisted until the UK formally left the EU in January 2020. However, the UK has been required to negotiate a new trading relationship with not only Europe, its largest trading partner, but countries all over the world.

The transport sector and businesses concentrated in haulage specifically have been greatly impacted by Brexit, as a result of increased amounts of paperwork which must be completed to ensure goods can move between countries. Increased bureaucracy has seemingly started to impact the UK’s trading position with alarming speed, as reflected in raw data for 2021 so far. Earlier in the year, we reported how UK exports with the EU fell by 40 per cent in January this year, with demand for whisky, cheese and chocolate exports falling by 75 per cent.

According to our own records, two large freight transport businesses collapsed into administration in early 2021, holding assets worth £1.5 million and £4 million respectively. However, despite the great losses in transport, there is cause for optimism that the shocks may have finally passed and proved transitory afterall; the European Parliament finally ratified the post-Brexit EU-UK trade deal in early May 2021, ensuring a return to tariff and quota-free trade in the coming years.

Just as the UK started to adjust to the post-Brexit trading world, a new challenge reared its head: COVID-19.

No sooner had the UK formally left the EU in January 2020, a new shock was on the horizon. In a matter of weeks, the UK recorded thousands of cases of COVID-19 and the government eventually moved to try and keep a lid on the pandemic with a lockdown in March 2020. However, the novel coronavirus continued to spread, with not one but two major surges in cases and deaths to follow over the coming year.

The prevalence of lockdown measures in the UK and abroad were aimed to stifle the spread of this disease, but doing so came at a significant cost: the economy had to be switched off.

The UK was not alone in having to make this decision, and while the shock is still fresh in our minds, its impact on the economy is increasingly obvious. As a mostly service-based economy, the primary engine for economic growth stems from the hustle and bustle generated from consumer spending, activity on the high street.

Not all of us were so fortunate to be able to carry out work from home, however. Locking down the economy meant the closure of retail spaces, including shops deemed non-essential retail establishments, as well as restaurants, cafés and shopping centres more broadly. As mentioned, the UK is a great exporter of food and drinks, including beverages such as whisky and beers – not only a hit to domestic demand, but this was a global shock.

When the hospitality sectors of European economies closed down during the pandemic, demand for such goods was reduced, as lockdown gave people fewer opportunities to buy such goods. We saw a number of export-dependent businesses based in the UK collapse into administration directly as a result of this issue. The likes of WooHa Brewing, which brewed special ales, and Alexander Inglis & Sons, one of the UK’s largest grain and malt providers for Scotch Whisky, collapsed into administration in recent months, citing tumbling exports as that last straw.

Before the pandemic, both businesses helped quenched the thirsts of thousands each day, as part of supply chains which fed into the UK’s beer and Scotch Whisky export streams. Neither business was equipped to handle a sudden disruption to demand such as that which we saw during the pandemic. Financially sound businesses such as WooHa and Alexander Inglis & Sons transformed into collapsing giants, leaving sizable amounts of equipment and infrastructure behind. It could be many weeks before the brewery doors and the grain silos are thriving with activity again, as in their pre-pandemic days.

You might rightfully be wondering by this point: is the trade demand shock facing the UK indeed a transitory phenomenon, akin to the 1970s oil shocks, or could it be something much deeper and more entrenched than we realise, more like a lost decade or two? You’ll want to know whether the current crisis will abate and offer a lucrative opportunity very shortly, or whether we could be talking about a sluggish economy with sub-par demand for the next decade or more, where growth prospects are muted at best.

Japan is a cautionary tale of the latter: in the late 1980s, Japan was touted as potentially becoming the world’s largest economy, growing fast enough to surpass the US. By the mid-1990s however, the bursting of a housing bubble sent Japan’s economy firmly into the economic slow lane and business conditions remain tough, even a generation later.

If indeed the demand shock passes without too much time and we avoid this Japanese scenario, it pays to have a pinch of optimism. Could you be the investor who has an eye on plots of land, grain silos or even brewing facilities, prospecting for an opportunity to help quench the thirsts of thousands once more, when demand is restored for the UK’s food and beverage exports? Time is of the essence.

The UK has been unlucky in facing not only a once-in-a-lifetime pandemic which impacted trade and business through an unprecedented set of lockdowns, but also a complex withdrawal process from the EU, a trade bloc with which it had been interlinked for almost half a century.

The post-Brexit/post-pandemic era takes the UK into uncharted territory: we don’t know precisely how long it will take for consumers across our popular export destinations to return to regular levels of discretionary spending. We also don’t know how a country fares after leaving the EU; we are breaking new ground with our departure.

We do know that disruption to trade flows has left many out of pocket with many businesses simply being unable to respond to these twin issues of COVID-19 and Brexit. But, while it may feel like the masonry of the old business order is falling down around us, the economy is always prone to such swings.

Without the downswings, there is no opportunity for the economy to clear out those businesses that no longer fit in with the current landscape, and equally, no opportunity to empower those with more potential, better-suited to the current climate.

The economic consequences of Brexit and the COVID-19 pandemic have posed a unique opportunity for those interested in investing in the future. Just as downswings are a part of the typical economic rhythm, upswings do prevail eventually. The remnants of older businesses can be broken up and recycled to help construct the building blocks for new, dynamic businesses of the future which can become tomorrow’s success stories.

The post-pandemic recovery is fragile but early signs suggest that the early-2020s could see something of an economic boom, with faster-than-usual economic growth to allow the economy to reach the position it would be by now without the pandemic.

In short, the UK doesn’t appear to be set to repeat the Japanese experience of a lost decade, but a golden decade of opportunity and recovery instead. Perhaps your investments in businesses in distress, whether they be in food and drink, haulage or elsewhere, will become part of the great success story of the next decade. You’ll never know unless you scour the business landscape for the next opportunity.

Administration List is an invaluable tool to help you realise this ambition in the coming years. With insights into the latest businesses in distress, we can help inform you in your quest to find the acquisition that best suits you. Subscribe today, and get the inside track on where UK businesses are going with Administration List.

No Responses to “Brexit and COVID-19: The Impact on UK Trade”