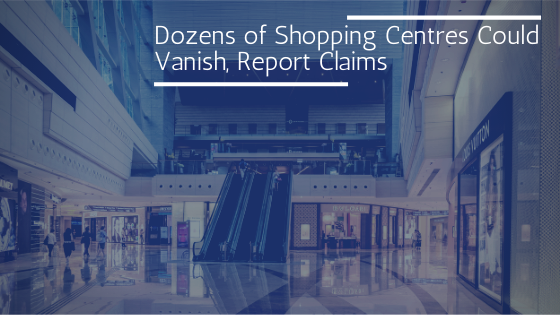 There are estimated to be as many as 700 shopping centres in the UK, but 10 per cent of them could disappear permanently, according to a new report by Local Data Company. The pandemic and shifting spending habits are expected to play a big role in this paradigm over the coming years, limiting the scope for shopping centres to expand, but opening up other opportunities for other interested parties.

The rise and fall of the shopping centre

The 1970s and 1980s marked a peak for the age of the shopping centre. Consumerism was on the rise, as credit cards grew in popularity, and more Brits were willing to splash the cash in person. Shopping centres were constructed in large numbers during these two decades, serving as venues offering wall to wall opportunities for consumer spending.

However, the rise of the digital economy has shifted much of this spending online, and it’s becoming clear that the growth in the number of shopping centres in recent decades was actually a sign of unsustainable over-expansion. It was a ticking time-bomb for retailers that was primed to go off at any moment, but the COVID-19 pandemic has been a defining moment, speeding up the decline of shopping centres which were already struggling.

Local Data Company is of the view that 70 shopping centres across the UK are prime targets for collapse, with 30 lying half-empty and five having vacancy rates as high as 80 per cent in recent months. Even a gradual reopening of the economy might not be enough to revive the fortunes of these centres, meaning that a return to some new normal will only delay the inevitable by a few weeks or months at most in some cases.

Put to good use again

There is light at the end of the tunnel for sites lying vacant as retail spaces at present. The shift to online shopping is apparently unstoppable; it is increasingly convenient and has been a necessary course of action during the pandemic.

The decline of shopping centres is more secular than seasonal. Repurposing and redeveloping these venues is a far more likely scenario in the coming years, especially as new planning laws will make it easier to convert vacant retail space into housing stock.

By keeping check of distressed retail spaces including shopping centres, you could be able to find lucrative redevelopment opportunities for building the homes of the future to house an ever-growing population. In the next 30 years, the Office for National Statistics expects the UK to be home to an additional seven million people, using 2018-based population projections, making the UK one of Europe’s most populous nations by mid-century.

With good timing, your quick-thinking and ability to stay ahead of trends in the retail space could help go towards a coming construction boom in the next few decades.

No Responses to “Dozens of Shopping Centres Could Vanish, Report Claims”