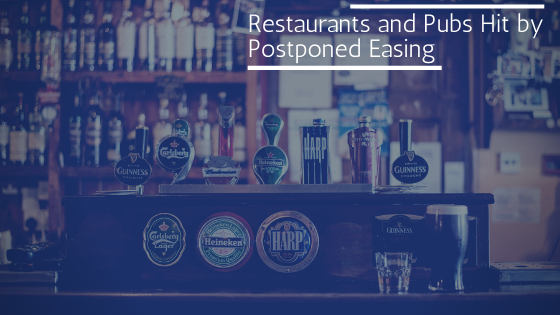 It wasn’t supposed to be like this. That is what a large number of restaurants and pub owners are likely to be feeling this week, after hopes of an expected easing of lockdown restrictions were dashed utterly by Prime Minister Boris Johnson earlier this week. Why does this matter and what could this mean for businesses like restaurants and pubs?

The path was simple, or so it seemed just a few weeks ago. So long as the UK met a set of criteria over the past few weeks, the UK was expected to make a transition on 21st June towards a marked easing of restrictions. One of the big expected easing measures included the removal of all legal limits regarding social contact.

If there’s one thing that can choke the business out of a restaurant or a pub especially, it’s measures designed to limit the numbers of people who can eat or drink at them. Due to the emergence of a new Delta variant of COVID-19 over the past month or so, plans for this 21st June easing have officially been put on ice, with the UK expected to remain under current restrictions until at least 19th July.

Venues such as pubs and restaurants will continue to have to impose limitations on the number of customers permitted indoors, as a rush of demand could take them over capacity and risk the transmission of further cases of COVID-19. The Delta variant is a particular concern for the UK, especially after evidence emerged that it has higher transmissibility, and that a delay to the easing of restrictions would be vital to prevent a third wave of cases, hospitalisations and deaths.

The health of hospitality

The signal is clear: the UK was unable to meet the requirements to ensure a safe easing of lockdown restrictions. The move to do so is made with the best of intentions, as protecting the health and safety of the population is paramount. A third wave of a more transmissible variant of COVID-19 remains a threat, even despite the record roll-out of vaccines, as it would place the NHS under greater strain, and ultimately damage the health and wellbeing of the population at large.

What is unavoidable as a result of the government’s actions is that increasing numbers of pubs and restaurants will be in a state of heightened uncertainty, as capacity limits will constrain how much they can earn during what is traditionally one of the most lucrative times of the year. The Sun is out for the most part, sports events are back on the TV, increasing the desire for many to pop down to their local pub to watch them, and consumers are hitting the shops again, often keen to find a shady spot to have a drink or a meal.

Just in the first week of June 2021 alone here at Administration List, we spotted an appointment of administrators for a business running licensed restaurants with assets to the tune of £1.1 million. Protecting the health of the population at large has the unintended effect of impacting the health of the hospitality sector, but assuming that restrictions do ease eventually, it pays to keep track of such administrations. For all you know, you might just come across a buying opportunity to cash in, when the pubs and restaurants are finally free to welcome back customers in their droves.

No Responses to “Restaurants and Pubs Hit by Postponed Easing”