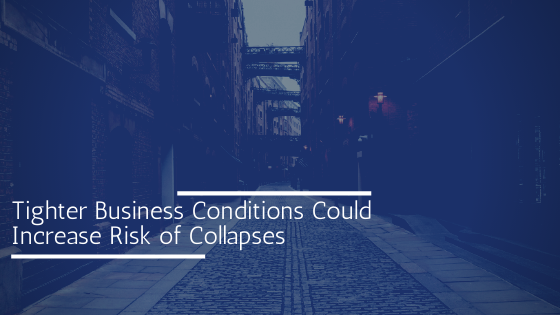 Government measures designed to protect vulnerable businesses from collapse during the pandemic could be just a quick fix, and a withdrawal of support would simply land businesses back into distress as they were in 2020.

The cost of COVID-19

UK businesses could be facing a form of financial hangover from next month onwards, as a series of government-based support packages begin to expire and unwind, leaving businesses in the ripe conditions for becoming distressed once more. A ban on commercial rent evictions has kept businesses from losing the properties they use for day-to-day operations, but once this goes, evictions could spike, if business revenues remain too low.

In addition, a growing number of so-called bounce-back COVID-19 loans will start to come due for repayment in the coming months after a year-long interest-free grace period , putting pressure on business finances even further. To make matters worse for many, businesses owe commercial landlords a mountain of debt estimated to be worth £6 billion at present. The government has just responded to concerns by businesses, extending the deadline for commercial evictions until March 2022 to give people extra breathing space.

A freeze on winding up petitions has kept businesses going for the time being, but this is poised to be removed by late September 2021, prompting concerns that businesses face a cliff-edge by later in the year, and that many may indeed fall over the edge of it, never to return.

Restructuring being held back

Consulting firm AlixPartners has reason to believe the number of businesses in distress will spike in the coming months, if government support is withdrawn. This comes as the firm has released findings of a survey of over 500 restructuring experts from leading advisory firms. Low interest rates and a record build-up of debt has helped keep vulnerable businesses afloat.

However, AlixPartners suggests such moves are merely allowing businesses to be “defying gravity in the UK” and that a sudden requirement for repayment of debts and rents after a period of calm could lead to mass business failure. A delay to the easing of lockdown restrictions was also cited as a risk factor which could worsen the situation for many UK businesses.

Alistair Beveridge, Managing Director of AlixPartners was especially concerned with the high levels of debt UK businesses have racked up just to stay afloat during the pandemic, describing elevated business debt levels as “significantly problematic.”

One issue which could blindside many businesses is a sudden increase in interest rates due to inflation coming in higher than expected in the next year, which might rapidly increase the cost of borrowing for businesses and push many into administration or liquidation. Signs of trouble in this regard became apparent, when the UK’s Office for National Statistics (ONS) reported that UK CPIH inflation over the past 12 months was recorded as having risen to 2.1 per cent in May 2021.

There is a possibility that CPIH inflation may exceed the Bank of England’s two per cent inflation target for many more months to come, raising the spectre of higher interest rates to keep price rises in check, inadvertently causing mounting borrowing costs and tighter business conditions as a result.

No Responses to “Tighter Business Conditions Could Increase Risk of Collapses”