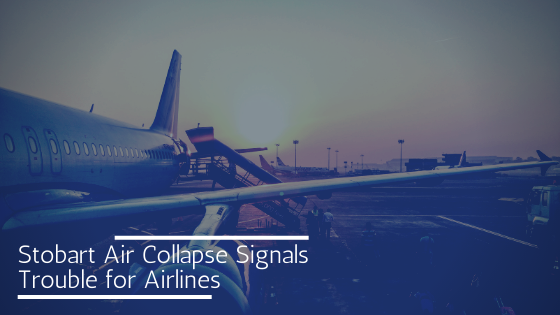 Compared to many destinations, the Republic of Ireland is a short stone’s throw away from many UK-based airports. Stobart Air was one of many airlines offering passage to and from the emerald isle, from countries including not just the UK but France, Portugal, Spain and the Netherlands. Unfortunately for Stobart, its flying days are over, as the airline collapsed into liquidation this month.

Stobart Air may have been an Irish airline, but much of its business was clustered around many of the UK’s regional airports, so its fate was decided as much by UK-based trends as it was domestically. The airline sector is one of the most globalised and diverse sectors of the global economy, and can be one of the most lucrative during regular times.

However, COVID-19 may have indeed been first seeded inadvertently by our ability to travel so freely in the early months of the pandemic. Its increasing spread made aviation one of the first obvious casualties as countries began locking down their borders, their economies and sticking closer to home. Airport Watch, which compiles air passenger volumes on an annual basis, calculated that UK airports had recorded a 75 per cent drop in total passengers in 2020 as compared to the previous year.

As referred to, warnings have been sounded about the impact of remaining restrictions on a number of foreign destinations for UK-based travellers. Unless more countries enter the UK’s Green List, many airlines will be increasingly cautious about the state of their businesses, as fewer travellers will be in a position to travel unless they have the cash to pay not only for their flights but the COVID-19 tests and potential quarantine hotel rooms if countries are on the UK’s Red List of countries.

The past year has been a story of fleets remaining earthbound and airline balance sheets looking far from rosy as a result. Unless the new variants of COVID-19 are overcome through the rollout of vaccinations not just in the UK but worldwide, travel overseas could remain stuck in a rut for many more months to come, leading to more collapses similar to the one Stobart Air experienced.

More domestic-based UK airlines could remain a safer option for anyone looking to enter into the aviation sector, but stormy skies could persist. A lack of a specific relief package offered by the UK Government is the most-often cited issue at play here, as there are little signs that such a plan is waiting in the wings to come to the rescue of other beleaguered airlines.

Investors face an enticing gamble: how to enter a sector with clear demand during more agreeable economic climates, when the sector remains turned upside-down by the pandemic. Indeed, it may be a simple game of watching the countries which come and go from the Green, Amber and Red lists, to divine a message of how the airline industry will fare from here.

No Responses to “Stobart Air Collapse Signals Trouble for Airlines”