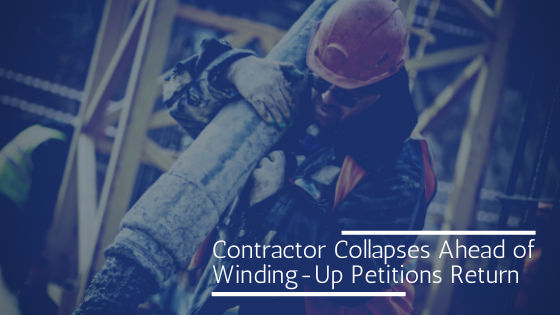 While the UK Government may have changed tack and delayed the return of Winding Up Petitions until September 2021, distressed businesses burdened with large amounts of debt are already collapsing after years in distress.

Henry W Pollard & Sons Limited is one such business, having survived 161 years of ups and downs, before falling into liquidation this year.

The collapse of Henry W Pollard & Sons Limited just goes to show that longevity doesn’t necessarily translate into strength. Despite having served as an effective contractor to both public and private construction projects, the company fell prey to the pressures imposed on the sector during the COVID-19 pandemic.

Henry W Pollard and Sons Limited’s financial situation before the pandemic no doubt played a significant role in its collapse: Companies House records that in the company’s last accounts, filed for the year up until 31st March 2020, suggested it owed creditors over £5.36 million, having owed them £5.85 million in the 2018-19 financial year.

Despite seemingly healthy profits of £170,888 in the 2019-20 financial year, Henry W Pollard & Sons had just recorded a loss of £159,638, suggesting that its business performance over the last few years was peppered with good and bad years. A high debt burden could have inhibited growth in the company over time, sapping it of the money needed to expand further, weakening it just in time for the pandemic.

The collapse of Henry W Pollard & Sons is just one story of many from the construction sector during the COVID-19 pandemic. As many as 1,634 construction firms collapsed into liquidation between March 2020 and January 2021, reportedly outstripping the losses in retail and hospitality. Other sources suggest there were 2,042 collapses in 2020 as a whole.

Late June was poised to be a pivotal time for businesses with high debt levels who were no longer in a position to repay debts, as Winding Up Petitions were expected to be reintroduced. However, the government has opted to defer this policy move until late September 2021, to give more businesses breathing space.

The question is this: if heavily-indebted businesses such as Henry W Pollard & Sons are collapsing already, before Winding Up Petitions have even returned, what could happen to the number of liquidations come early October? Is the government simply delaying the inevitable?

No Responses to “Contractor Collapses Ahead of Winding-Up Petitions Return”