Last Scraps of Arcadia Group to be Liquidated 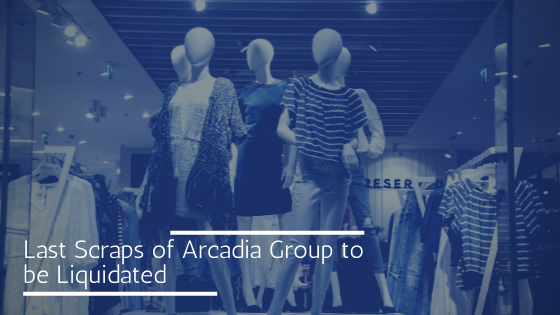 Of all the collapses in the UK retail sector over the last decade, Arcadia Group perhaps represents one of the greatest falls from grace. At its height, it commanded operating profits of roughly £300 million in 2005, as part of Taveta, the holding company which had invested to own a majority of Arcadia Group itself. By 2018, profits had crashed to just over £50 million.

The fall of Arcadia extended

Arcadia’s rise and fall is predictable with hindsight, when you consider how ill-prepared it was to modernise its way of working as the parent company of brands such as Dorthy Perkins, BHS, Topman and Topshop. The 2000s marked the onset of a digital revolution which Arcadia was seemingly blindsided by. As more profitable rival companies branched into increasingly online sales structures, Arcadia Group’s array of mostly fashion-oriented brands relied on the age-old assumption of physical store purchases getting them through the financial year.

Arcadia Group fell into administration in November 2020, as one of the largest retail casualties seen during the COVID-19 pandemic. It was once a multi-million-pound profit-making machine, but as of July 2021, auditing firm Mazars is reportedly being called in to oversee the year-long process of liquidating the crumbling remnants of the Arcadia empire.

HM Revenue & Customs is widely expected to be the greatest beneficiary of this year-long liquidation, through unpaid VAT liabilities, while private creditors are likely to be fighting for the remaining scraps. Even so, HMRC is expected to be unable to recoup the full £44 million it is owed in total, representing the loss of millions of pounds in the process.

Arcadia Group is likely to fall into historical business records as a byword for an epic fall from grace of a true retail giant. Savvy investors watching the retail space for opportunities might be more likely to find assets suitable for stripping rather than a viable business to resurrect in full with the likes of Topshop, BHS or Dorothy Perkins.

Asset stripping is a suitable alternative to trying to rescue a business model which is simply too antiquated to be viable in the current climate. It puts old assets to good use in the here and now, making them shiny and new as part of a more viable venture which is better-adapted to survive in the new post-COVID world we are emerging into.

As part of Arcadia Group’s liquidation proceedings, rich pickings for private individuals might be thin on the ground due to the debt owed to HMRC, but other similar retail collapses could offer unique opportunities to scoop up IP, assets and floorspace for fresher opportunities. These assets could be yours for the taking – but what will you do with them now?

No Responses to “Last Scraps of Arcadia Group to be Liquidated”