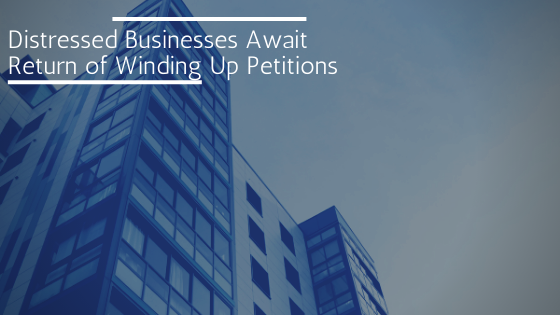 In ordinary economic circumstances, businesses and creditors enjoy a virtuous cycle. A business borrows to invest and expand, and the revenue it makes from the services it provides help pay off the debts it owes to its creditors. In turn, this improves the likelihood that the creditor will be willing to allow the business to borrow further in the future.

When a downturn has reared its head in the past, businesses were often expected to take a hit, and might struggle to pay down their debts in the allotted time agreed to their creditors. In this situation, creditors had a toolbox of measures, including winding up petitions, giving them legal recourse to ensure the repayment of money owed.

However, the COVID-19-induced downturn is unlike any other, and presents an unusually large hit to the profitability of businesses. It has impacted their ability to pay down debts en-masse, but creditors have been denied their usual recourses. Crucially, the use of winding up petitions has been restricted for many months, with the deadline pushed back to September. What is the impact of this measure, and with talk of this finally being lifted, what lies ahead for distressed businesses?

Once in a lifetime

If the financial crisis of 2008 was equivalent to an economic heart-attack, the lockdown put in place to stem the COVID-19 pandemic was akin to the virus’ own impact on our health: something with potentially long-lasting damaging effects. Businesses across a range of sectors found themselves unable to continue with business as usual, as lockdown restrictions forced non-essential businesses to close their doors indefinitely back in March 2020.

Footfall is one of the most easily-observable metrics to judge how severe the COVID-19 shock was on the retail sector. The Institute of Place Management claimed footfall in shops collapsed to just 10 per cent of its pre-pandemic levels during the toughest parts of the UK lockdown in early 2020 and the post-Christmas 2020 period. The government responded to the collapse in business activity by launching an unprecedented level of support measures to stave off total destruction.

One of the hallmark measures of support offered by government was a temporary restriction of winding up petitions in the UK. Others included the suspension of commercial evictions. Why were these measures necessary? Cashflow was reduced by the pandemic and the ensuing lockdown, and without some suspension of these regular business practices, insolvencies were set to skyrocket.

As a consequence, we saw businesses take on higher-than-usual levels of debt in the months that followed. Natwest analysed the corporate debt issue at the heart of the UK economy, and surmised that the sheer quantity wasn’t so much of an issue, but rather how it was distributed across the economy. While Natwest was convinced there would not be an immediate corporate debt crisis owing to the low aggregate debt levels, the distribution of debt places longer-term impediments to growth on the businesses which have suddenly had to enter the world of corporate borrowing.

More vulnerable SMEs, particularly hospitality-oriented businesses, for example, faced virtually no custom over lockdown, potentially requiring them to borrow more to make ends meet or simply stay in the game. Some of these businesses might face a harder time trying to seek finance in the first place, so they start at a disadvantage from the off.

Those who were just scraping by during the pre-COVID era might find themselves disproportionately more likely to require loans or government support nowadays, making them indebted in a way which risks making the UK’s recovery from the pandemic fragile, or so it seems.

The government has delayed the restoration of proper winding up petition proceedings no fewer than four times. The third extension to a delayed return gave the government a deadline of late June 2021 to restore them fully, but failed to take stock of how COVID-19 would continue to impact public health and, by extension, the economy – even as sectors of the economy were allowed to re-open at long last from May onwards.

Despite June 2021 being offered as a final deadline, the government moved at the eleventh hour to push this back to late September 2021. One of the outcomes of delaying such measures is an unusually low number of insolvencies in the first half of 2021; indeed, this year has seen half the amount observed during the same period in 2020.

But there is more behind the headline figures than you may realise. While fewer insolvencies sound good on paper for UK businesses, is the government simply compounding the issue and delaying the inevitable drop of the cliff for the UK economy?

Government measures have suppressed insolvencies just as they were intended to suppress the number of cases of COVID-19, but just as the virus follows cycles of ups and downs, the business cycle does tend to reassert itself eventually.

By supressing the natural cycle of insolvencies over much of the last year, there is a risk of imbalances building up in the economy – unprofitable or ‘zombie’ businesses with high debts and no real viable route forward may risk proliferating. If measures are unwound, the abnormally low insolvency rate may spike to an abnormally high level, to clear out the larger number of weaker businesses.

There are signs that the process of insolvency isn’t completely out of fashion – we reported back in June how contractor Henry W Pollard & Sons collapsed just ahead of the third winding up petitions deadline, before it was pushed back. This contractor was weighed down by heavy debts even before the pandemic, sapping it of the cashflow needed to invest and move forward. When the pandemic came along, an already-weak business was pushed to the edge, and then fell over it.

Some businesses are simply unviable and no amount of support will keep them going no matter how much financial support is extended, so there are signs that the insolvency cycle remains intact even now, and that a return of winding up petitions will simply accelerate the process of collapses.

Blair Nimmo, Chief Executive of Interpath Advisory, claims: “The dichotomy of having historically-low insolvency rates at a time of significant economic crisis is naturally prompting concern in some quarters that the taxpayer is propping up an army of zombie companies.”

Mr Nimmo clarifies that zombie businesses aren’t necessarily the issue to worry about, as there is evidence that many businesses experienced damage to balance sheets solely due to the pandemic. As a result, insolvencies might not experience an earth-shattering spike in the coming months. However, the causes of the insolvencies that do occur could be more fundamental and less immediately obvious than you might think.

A return to some form of new normal will potentially mean high demand but supply chains might not have time to catch up, causing manufacturing bottlenecks. Labour shortages are another issue, with the UK’s ageing population limiting the pool of potential future workers plus an expected reduced level of net migration in future years due to Brexit.

As Mr Nimmo explains: “Issues such as labour and raw material shortages and rising costs continue to weigh heavily on many. Pricing contracts against this backdrop is extremely tricky.”

Businesses which traditionally relied upon large amounts of labour sourced from workers originally based overseas might find it harder to invest and grow, if people from overseas decide to take their labour elsewhere. To cope with supply pressures, businesses might attempt price hikes to make up for raised input costs, and while this may provide a short-term boost to profits, consumers might turn their noses up if they feel inflation is eating too much of their purchasing power.

The state of winding up petitions

September 2021 is the latest deadline the government has offered for an expected return of winding up petitions. But as many creditors will have seen, past assurances of their return proved without substance. It isn’t unreasonable for many of them to assume the government may simply adopt a pragmatic approach, continuously review the data and keep opting to nudge the deadline back – unless they are convinced the economy is ready for such proceedings to return.

It does appear that the proverbial can is being kicked down the road for another three months. While it gives beleaguered firms respite, the risk is that a climate of complacency could grow in some sectors – why worry about the balance sheet and debts owed, if winding up petitions keep being held back, some firms might argue.

If such a mindset becomes entrenched, a post-COVID shock could become even greater, as companies simply are not able to acclimatise to the new economic reality which is, in actual fact, just a return to pre-crisis conditions.

The continual delay suggests the government is taking a more dovish approach to businesses at the expense of creditors. This state of affairs might be necessary for enough time to stave off an unsustainably high number of insolvencies, but it isn’t a long-term solution to the problems businesses face. Winding up petitions are just one of the proceedings put on ice by the government in its pragmatic approach to businesses – commercial rent evictions are another, not expected to return until March 2022 at the earliest.

Blair Nimmo addresses the subject: “Recent confirmation of a nine-month extension to the commercial rent moratorium to 25 March 2022 has come as a double-edged sword – broadly welcomed by tenants, but prompting further frustration amongst under-pressure landlords who, by the time the moratorium ends, will have been prevented from collecting arrears for two years.”

There risks being a degree of uncertainty when cases are finally heard by arbiters when the time comes, reflecting a crucial conundrum when things return to ‘normal’, whatever shape that may take. The UK economy was, in computer terms, switched off and on during the pandemic, and glitches may arise as a result of this sudden and unexpected switch-off.

Government measures may have suppressed insolvencies for more than the last year, but their eventual return will require a return to some equilibrium – businesses which are unable to sustain themselves financially with all things considered equal in the economy are prone to collapse sooner or later. As insights from the front lines of the restructuring industry show, issues such as winding up petitions and commercial rent evictions are just some of the concerns businesses will be worried about.

Supply chain issues could mean higher prices to protect bottom lines, pushing up inflation. The Bank of England (BoE) is mandated to keep inflation close to two per cent, and may be required to raise interest rates in the event of a post-COVID spike in inflation. Winding up petitions are a major consideration and could impact insolvency rates in months to come, but larger economic trends could move to cause tighter business conditions down the road, and you need to be able to foresee them to predict how businesses may fall into distress and for how long.

Labour shortages from a slow-growing labour force will affect certain sectors more than others too, so it pays to see the bigger picture to help inform your choices when making an acquisition. Winding up petitions aren’t the only thing keeping business owners up at night, and might not be the only reason more opportunities fall into your lap.

No Responses to “Distressed Businesses Await Return of Winding Up Petitions”